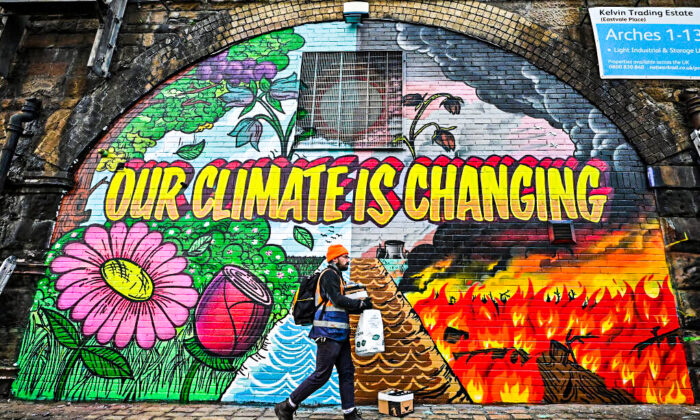 Artists paint a mural on a a wall next to the Clydeside Expressway near Scottish Events Centre (SEC) which will be hosting the COP26 U.N. Climate Summit in Glasgow, Scotland, on Oct. 13, 2021. (Jeff J Mitchell/Getty Images)
Viewpoints

In an address to the Rural Press Club in Brisbane on March 17, the Australian Deputy Prime Minister Barnaby Joyce criticised youth climate change activists, stating: “Those carrying coffins out of Ukraine churches are not focused on climate change.”

In making this curious statement, Joyce suggested that high school students should be more interested in how to defend their country from war-like calamities rather than being focused on climate change and zero-emissions rhetoric.

Climate change is certainly a crucial issue, but its multi-faceted aspects, involving conflicting and mutually exclusive scientific opinions, and generating dubious economic practices, show that it may not be amenable to a calculated activist approach.

Joyce’s comments came just a few days after a unanimous decision of the full bench of the Federal Court of Australia, Minister for the Environment v Sharma. In their decision, the judges ruled that the state does not owe a duty of care to the nation’s youth to ensure that they are not harmed by state action (or inaction) on climate change and global warming.

Chief Justice Allsop held that the requisites of a new tort are not available because the relationship between the government and the student activists lacks the relevant nearness and proximity necessary for the imposition of a duty of care.

At one level of abstraction, we all rely on an elected government to develop and implement wise policy in the interests of all Australians, in one sense, especially the children of the country who are its future. That is not the foundation of the law of torts. It is the foundation of responsible democratic government.

The court case had been initiated by eight activist high school students, who sought to test the court’s willingness to create a new tort. Although the case presented the court with an unusual and unexpected opportunity to further expand the scope of the law of torts, the duty to look after the welfare of all Australians, especially its youth, belongs to Australia’s democratic institutions.

Following the court’s announcement of its decision, the student activists vouched to continue to hold the government accountable for its climate change policies. There were even suggestions that leave to apply to the High Court should be pursued by their legal counsel.

This case throws up a number of questions, the answers to which are difficult and challenging. Should high school students be involved in protests and even skip school for that purpose? If skipping school is against school policy, what considerations could be adduced to conclude that their action has redeeming features?

The answer to these challenging questions could be found, at least in part, in the concept of “symbolic speech,” according to which people, including high school students, are entitled to be involved in the action that is based on a heartfelt desire to protect the environment for future generations.

The student activists could argue that, even if their action is against school policy, it is a sound moral imperative, and the price of doing nothing would consign their generation to a diminished life. Hence, it becomes important to discuss the rights of high school students to oppose the government’s current climate change policies.

Specifically, the youth activists agitated against the proposed extension of a coal mine in Queensland. They argued that such extension could cause injury, or even death, arising from carbon dioxide emissions and subsequent global warming.

One could add that the students’ actions had been influenced by the global climate change religion, spearheaded by an angry-looking Swedish student, Greta Thunberg.

Of course, this opinion piece does not lend itself to a considered analysis of the appropriateness of allowing an extension of the coal mine, except to say that such a decision must always involve a review of employment opportunities, the local economy, and well-being of the population, in addition to the level of expected pollution that the extension would generate.

An assessment of the students’ action could learn from an iconic decision of the American Supreme Court, Tinker v Des Moines Independent Community School District, decided in 1969. It involved the wearing of black armbands by school students in breach of an established school policy to denounce the American involvement in the Vietnam war.

The Supreme Court held that the students’ right to wear a black armband constitutes an example of a special kind of protected speech—“symbolic speech”—even though the students’ action violated established school policy.

In instances of “symbolic speech,” the court said that “freedom of expression would not truly exist if the right could be exercised only in an area that a benevolent government has provided as a safe haven for crackpots.”

“The Constitution says that Congress (and the states) may not abridge the right to free speech. This provision means what it says. We properly read it to permit reasonable regulation of speech-connected activities in carefully restricted circumstances. But we do not confine the permissible exercise of First Amendment rights to a telephone booth or the four corners of a pamphlet, or to supervised and ordained discussion in a school classroom,” the court said.

Similarly, in the earlier case of Musser v Utah, the Supreme Court stated that the “position, that the state may prevent any conduct which induces people to violate the law, or any advocacy of unlawful activity, cannot be squared with the First Amendment.”

Nevertheless, one could legitimately ask the question of whether it would be better for youth activists to spend their energy and commendable enthusiasm on the recuperation of the rights lost during the COVID-19 pandemic, instead of focusing single-mindedly on climate change and global warming.

The question acknowledges that, at present, a person’s civil rights are under tremendous stress and routinely violated by policymakers, trendsetters, and autocratic politicians, who typically follow the recommendations of the bureaucratic health brigade.

The student activists live in an era where civil rights are violated in the name of health. During the last two years, these rights have been swept away by government-sponsored policies to protect the health of Australians, disregarding their civil rights.

Certainly, although climate change is an important societal issue, Joyce’s comments implied that the high school student activists, rather than being concerned with climate change, should worry about matters of life and death and about the liberal and Christian origins of Australia and our civil rights which are embedded in the legal system.

To conclude: while the students’ protests are legal as an expression of “symbolic speech”—and certainly not an exercise in futility—based on legitimate moral concerns, they could nevertheless be regarded as narcissistic emanations of young people who should ideally concentrate on their studies before becoming climate change activists—because there is much to learn and un-learn.