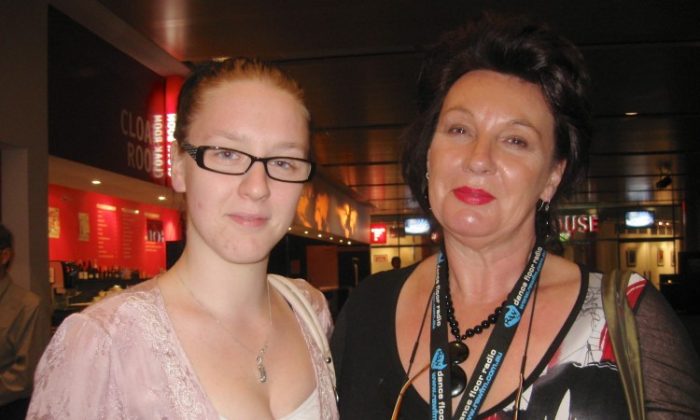 “It was wonderful,” said Moya Montgomery. “This is the first time I’ve seen Shen Yun; I’ve wanted to go for so long. The costumes and the dancers were just beautiful. We will be back next year with the whole family.”

Ms. Montgomery used to own a jewellery shop, but is now a carer for her disabled son. She received a ticket to see Shen Yun as a Christmas present from her older son and his girlfriend, Jessica Dwyer, who accompanied her. Her older son cared for his brother so his mother could attend. Ms. Montgomery thought her gift was “wonderful” she said. “It’s such a treat for me,” she added gratefully.

Ms. Dwyer works in retail and used to be a dancer with Canberra Ballet Company when she was younger. She has a strong appreciation for music and the arts, and agreed that it was a treat to see Shen Yun. “It’s good to be able see such a wonderful performance,” she said.

“Fantastic music, the choreography, they worked together, they incorporated so much together, the costumes were so … you couldn’t miss them, absolutely wonderful.”

New York-based Shen Yun has three equal-sized companies that tour the world simultaneously. Alongside ballet, classical Chinese dance is one of the most comprehensive dance systems in the world. Classical Chinese dance has been passed down continuously for thousands of years through the imperial courts. It consists of three main parts: bearing, form, and technical skills including difficult jumping and tumbling techniques, according to the Shen Yun website.

Ms. Dwyer said, “all the spinning and turning; I used to have trouble keeping oriented with what I needed to do, they never missed a step. It was fantastic.”

Ms. Montgomery said she was very impressed with “the choreography, the number of people onstage and just the movement.”

“The dance steps are so traditional, it’s just beautiful and some are cheeky too,” she added, referring to the piece called When Shaolin Monks Protect the Emperor.

“My favourite theme was the monk’s temple and where they had the war. I studied martial arts when I was younger and it brings back memories for me. It was just wonderful, they are such beautiful dainty people,” she continued. “The costumes, the color, fantastic.”

Ms. Mongomery felt there was a message of “freedom” in Shen Yun, referring to the dance called An Unexpected Encounter, that depicts tourists who were mistakenly persecuted as many Chinese nationals are every day. She felt it important that more people learn about this message from the dancers. “They need to keep on doing what they are doing, you’ve got to get it out there.”

Both ladies mentioned the ornately decorated costumes, which are made from delicate fabrics with the most vibrant colors.

Ms. Dwyer added “that was just fantastic, the colours; it’s just right there, you can’t miss anything.”

The ladies were both appreciative of the artists in the show. Ms. Montgomery said, “Keep up the great work, guys and girls. It was beautiful, beautiful work; you must really love what you do and we really love to watch it too. So please come back.”

Ms. Dwyer said, “It’s absolutely fantastic so many people are enjoying it. When I bought the tickets there were so many people saying they’d already seen it, giving it high praise.”

When asked what message these ladies would send to the world about Shen Yun Ms. Montgomery said, “Exciting, brilliant, the costumes, the movement, the dancing; just an experience nothing like you would get to experience here in Canberra”

Ms. Dwyer said “I thought it was fantastic … it was great to get out and see something different … culturally eye opening.”