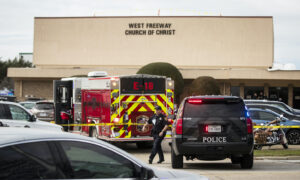 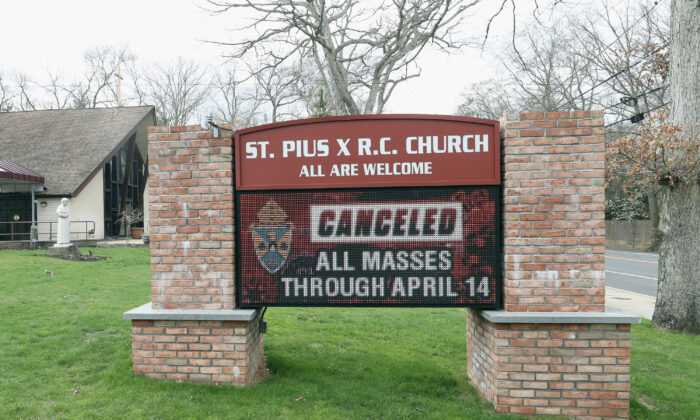 A display in front of St. Pius X R.C. Church on April 10, 2020, displays a message that all masses through April 14 are cancelled in Plainview, New York. (Bruce Bennett/Getty Images)
Policy

A police officer from a Mississippi city told a pastor who was preparing a drive-in service on Thursday that his rights were suspended because of an order from the mayor.

In a video live-streamed by Pastor Charles Hamilton Jr. before the planned 6:30 p.m. drive-in service at King James Bible Baptist Church in the City of Greenville, around 10 police cars could be seen parked along the pavement leading to the church carpark.

A policeman explained to Hamilton that they came to show the people attending the service “a form of warning.” The police would let attendees go without a ticket if they read the warning and leave on their own accord.

Another police officer, who appeared to have shown Hamilton the form minutes earlier, joined in to say, “By order of the governor, your rights are suspended,” the officer said.

Hamilton responded vehemently, “Our rights don’t come from authority. It comes from the Bible. So the authorities don’t have right[s] over the Constitution.

“We[‘re] talking the constitution of law, the First and Second Amendment, the U.S. Constitution that was given to us by our forefathers. “Mayor Errick Simmons can’t take it away, nor the police officer. They can’t,” he said.

The Epoch Times reached out to the Grenville City Police Department but wasn’t able to get a comment by press time.

Video from Pastor Hamilton of King James Bible Baptist Church in Greenville, MS. Church tried the “drive-in” method of holding services & were targeted due to the Mayor issuing an order prohibiting such services. Watch as an officer tells the Pastor that his rights are suspended. pic.twitter.com/zLdT6Qd8ew

The police surrounded the church’s parking lot during the Thursday night drive-in service and fined churchgoers $500 for violating a curfew order by the mayor, WREG-TV reported.

On Tuesday, the Greenville Mayor Errick Simmons had issued an executive order banning all church services.

“All church buildings will be closed for in-person and drive-in church services, until the State of Mississippi’s ‘Shelter In Place’ Executive Order No. 1466 is lifted by Governor Tate Reeves,” the executive order reads.

“Churches are strongly encouraged to hold services via Facebook Live, Zoom, Free Conference Call, and any and all other electronic, social media, streaming, and telephonic platforms available for the safety and protection of life.”

The CCP virus, which originated in China, has caused at least 108,167 deaths globally and infected over 1.7 million people as of Saturday afternoon, according to data collected by Johns Hopkins University. The numbers are considered to be inaccurate because of a lag in data collection by governments as well as significant underreporting of known cases and deaths by mainland China.

There are over half a million confirmed cases and 20,389 deaths in the United States.

Some churches are exploring drive-in services amid the outbreak, while many churches have closed onsite service and turned to live streaming options.

However, differences in approaches to balance social distancing rules are on the rise as some state and local authorities place restrictions on any form of onsite church service, including drive-in services.

Fischer also threatened that Louisville Metro Police will write down the churchgoers’ license plate numbers and turned them to the city’s health department, the Courier-Journal reported.

On Fire Christian Church, a local church in Louisville, launched a lawsuit (pdf) to lift the mayor’s ban.

Judge Justin Walker from the U.S. District Court for the Western District of Kentucky granted a temporary restraining order against Fischer on Saturday to allow drive-in service on Easter Sunday, WDRB-TV reported.

“Of course church parking lots cannot be singled out with unfair standards that differ from other establishments,” he added.