Your Living Standards Have Declined Dramatically 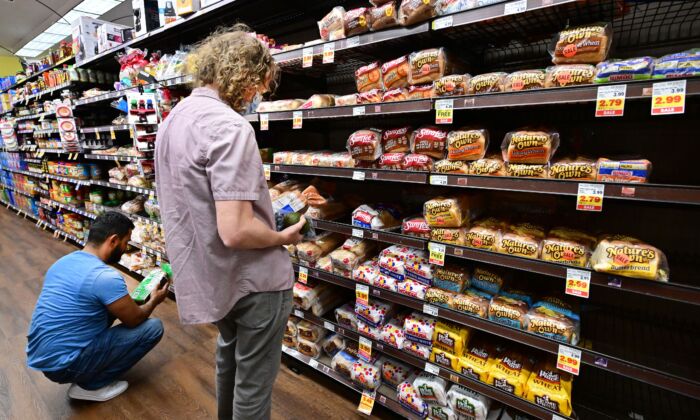 People shop for bread at a supermarket in Monterey Park, Calif., on Oct. 19, 2022. (Frederic J. Brown/AFP via Getty Images)

In the old days, shopping for groceries used to be a joy. By old days, I mean two years ago. Now, it’s shocking and miserable. You look at these prices and wonder if you can even afford normal foods that we took for granted.

Everyone knows about the egg problem, which is being chalked up to a bird flu, just as Russian President Vladimir Putin was responsible for the gas price and greedy meat processors caused beef prices to soar. Sorry, but this is ridiculous. The price of eggs is up dramatically because all of the costs associated with making them available to consumers have increased.

At first, there was just a shortage because grocery chains resisted price increases. Once they came back to the shelves, the cost dramatically rose. You’re going to pay more for the worst eggs than the best ones cost only a year ago. Unless you know someone with chickens or have them yourself, you’re stuck with thin shells and light-yellow yolks forever while paying through the nose for them.

The bottom line is undeniable: In a mere two years, many of the things you loved, such as healthy food for your family—I’m not talking about the all-carb diet they want us to adopt—has now doubled in price. Some of it is up by 50 percent, while some of it is up by 150 percent. This damage absolutely isn’t captured in the Consumer Price Index, which has huge drawbacks by being calculated on an annual basis and for being a weighted index number that fails to capture the reality on the ground, which is what you see on the shelves of your local stores.

Grocery prices tell the truth that you’re being pillaged.

The pillaging isn’t limited to this problem, and, by the way, this isn’t going to improve. It would take dramatic deflation to restore our standards of living. The Federal Reserve will never permit that. At best, their intention is to take the inflation rate down to 2 percent per annum. It now stands at about 6 percent, maybe. So even if it happens to fall to zero, all prevailing prices will stick. That means that you’ve been robbed.

The fundamentals of household finance are even worse. Credit card balances are way up. Savings are way down. And real income (which is adjusted for inflation) has been falling for 21 months straight. Truly, it’s panic time, but people are so beaten down and exhausted that they aren’t panicking. Most people have acquiesced in exhaustion of the shock and awe to which they’ve been subjected.

The data portend terrible things for our future, truly pointing to the end of prosperity. In fact, middle-class people barely remember what that was like, even though we experienced it as recently as 2019. We didn’t have to choose between eating good food and heating our homes, paying our cell phone bill and going on vacation, or drinking good wine and joining a gym. We could do all of those things.

No more. Our living standards have been taken down a peg or several. Of course, it doesn’t affect the very wealthy that gathered this week in Davos, Switzerland, for the World Economic Forum. They have all the resources they need and can continue to live as always. It’s the rest of us who are being ground down into the dirt.

Note, too, the smaller packages of everything, with producers shaving off ounces every few weeks. Try to buy the big packages like you did three years ago and you’re likely out of luck. My favorite Turkish coffee is the same price but half the size. Did humanity suddenly desire smaller quantities of things? No, this is just a way to disguise price increases without letting the consumer know.

The other day, I bought movie tickets, but the bottom-line price was higher than the units. That’s because the software added a $5 “convenience fee.” It’s so great to know that now I have to pay an extra fee for the delivery of an electronic good.

Remember when Uber and Lyft were cheap and even a good alternative to owning a car? Those days are long over. Now, it costs $40 just to get across town in Washington. And New York, forget it. The prices are astronomical, while the subways are more dangerous than ever. Might as well not go.

This is what’s happening to us.

Now, to the critical question. How was all this accomplished, this massive increase in taxation by surreptitious means? Please understand: this was accomplished not by Putin or greedy corporations but by the Fed. They have the legal power to counterfeit. They do it by buying government debt with money that hadn’t previously existed. This new money makes its way through the economy, watering down the value of existing money.

It’s like this. Let’s say you’re holding a kids’ birthday party and have only one can of frozen lemonade. But it turns out that 50 kids show up. You do what’s possible to stretch the lemonade but each serving gets weaker. At some point, it’s just water. The kids start to notice. You have to explain that you bumped into the physical limits. The lemonade has become ever less valuable.

It’s the same with the Fed. It doesn’t matter that the dollar can buy more foreign currencies than ever. That has nothing to do with anything. What matters is not how much foreign currency it can buy but how many goods and services it can buy. The reason it buys far less traces to the outrageous monetary expansions of 2020 and 2021. That’s the whole reason. At one point, monetary expansion was running at 26 percent per year!

They robbed you to fund their outrageous lockdown experiment and put as many businesses and people on the payroll as possible. They might as well have dropped money from helicopters. We’re paying the price for this monetary malfeasance.

And now? For the first time ever, M2 is actually falling. How do you think that’s going to work out? The mismanagement of our nation’s money stock is breathtaking.

And did you see the idea of a $1 trillion coin being floated again? This has to be the biggest monetary hoax in history. You can’t just mint a round coin, out of any material, even platinum, and cause new wealth to come into existence. The idea keeps popping up, but nothing comes of it simply because the alchemy is too obvious even for the power elite to pull off.

Our rulers in Washington have gotten themselves into a real fix. The people are furious about what’s happening and want to know why. There’s a growing populist movement out there that simply won’t go along. We aren’t giving up our gas stoves. We aren’t going to eat bugs. And we aren’t going to give up our birthright to freedom just because a bunch of partying clowns in Davos tell us that we have to.

We really do face a choice right now. If we don’t act and don’t choose wisely, we face a future of growing impoverishment, ill health, and deprecated living standards. We aren’t doing this to ourselves. They’re doing it to us, and they’ll continue so long as they can get away with it.