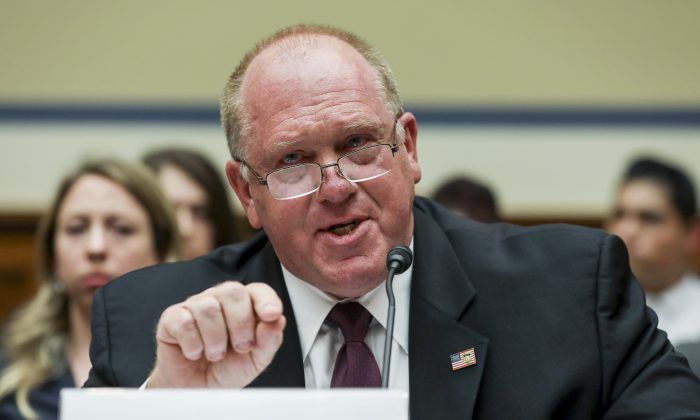 Former acting ICE Director Tom Homan testifies at a House hearing in front of the Committee on Oversight and Reform, in Washington on July 12, 2019. (Charlotte Cuthbertson/The Epoch Times)
Politics

The House hearing on July 12 saw some emotional and testy moments as Democrats confronted previous immigration officials on the alleged treatment of illegal immigrants.

A notable exchange was between former Acting Immigration and Customs Enforcement (ICE) Director Thomas Homan and Rep. Jesús García (D-Ill.), who clashed on several points during the House Oversight and Reform Committee hearing.

When questioning Homan, García accused the former ICE chief of not caring about illegal immigrant children “because these children don’t look like children that are around you.”

Thomas Homan to @Repchuygarcia: “Your comments are disgusting…I’ve served my country 34 years and yes, I held a five-year-old boy in my arms…for you to sit there and insult my integrity and my love of my country and for children, that’s why this whole thing needs to be fixed.” pic.twitter.com/gGA7qW4RgU

“How can you possibly allow this to happen under your watch?” García asked. “Is it because these children don’t look like children that are around you?”

“Have you ever held a deceased child in your arms?” the congressman went on to ask.

“First of all your comments are disgusting!” Homan replied. “I’ve served my country for 34 years, this is out of control. I’ve served my country for 34 years and yes, I held a five-year-old boy in my arms … and I knelt down beside him and said a prayer for him because I knew what his last 30 minutes of his life were like and I had a 5-year-old son at the time. While I’m trying to do my 34 years serving my nation is to save lives. So for you to sit there and insult my integrity and my love for my country and for children, that’s why this whole thing needs to be fixed.

“And you’re the member of Congress, fix it!”

García then responded: “We agree on that. … But I also disagree with your characterization of immigrants as prone to criminality,” before Chairman Elijah Cummings interrupted the heated exchange to restore order.

Cummings then allowed Homan to continue responding to García’s accusations.

“No one has experienced what I’ve experienced. I saw many dead bodies coming across this border,” Homan said.

The former ICE chief then criticized the Democratic Congress members for their open border agenda.

“If you want to legalize illegal immigration, good luck with that because it’s going to get a hella a lot worse at that border … if you say there are no consequences, no deterrence for coming into this country illegally. More families would come, 31 percent of women will be raped, more children would die. We’re a nation of laws. If you don’t like it, sir, change it, you’re the legislator,” Homan said.

Presidential hopeful Sen. Elizabeth Warren (D-Mass.) recently unveiled a plan in a blog post on Medium to repeal a law that makes unauthorized entry into the United States illegal.

Along with García, Homan was also involved in a testy exchange with Rep. Alexandria Ocasio-Cortez (D-N.Y.) during the hearing. The freshman congresswoman has been highly vocal in her criticism about the alleged treatment of illegal immigrants at the southern border in recent weeks. One of her most contentious claims was that a Border Patrol agent had told a detainee to drink water out of a toilet bowl inside a detention facility in Texas.

During Ocasio-Cortez’s questioning, she focused on a memo recommending “zero tolerance” on the border crisis that Homan had signed.

But Homan refused to allow her characterization of the memo as a “family separation policy.”

“I recommended zero tolerance,” he said after a few exchanges.

Ocasio-Cortez went quiet for a few seconds, before countering, “Zero tolerance was interpreted as the policy that separated children from their …”

Interrupting, Homan replied: “If I get arrested for DUI and I have a young child in the car, I’m gonna be separated.

“When I was a police officer in New York and I arrested a father for domestic violence, I separated that father from his home.”

Ocasio-Cortez replied, “Mr. Homan with all due respect, legal asylees are not charged with any crime.”

“Seeking asylum is legal,” she said.

“If you want to seek asylum, you go through a port of entry,” he responded. “Do it the legal way. The attorney general of the United States has made that clear.”

“OK,” said Ocasio-Cortez, and moved on.

Earlier in the hearing during his opening statement, Homan slammed Congress and the media for the “unprecedented attack and vilification” immigration agents face amid the crisis at the southern border.