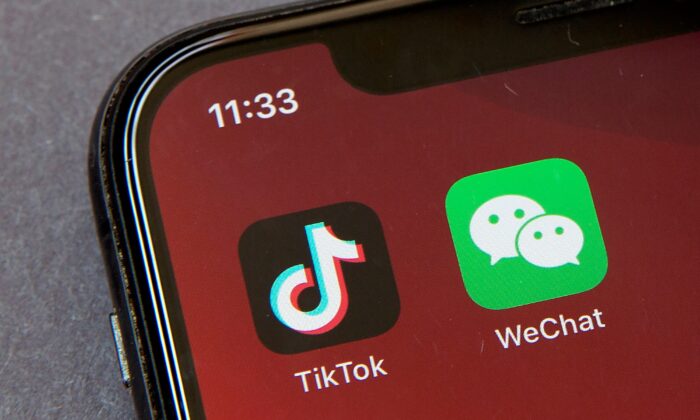 Icons for the smartphone apps TikTok and WeChat are seen on a smartphone screen in Beijing, on Aug. 7, 2020. (Mark Schiefelbein/AP Photo)
Viewpoints

Your Call May Be Monitored: China-Like Surveillance Comes to the US

Not surprisingly, the CCP (Chinese Communist Party) uses WeChat to spy on Chinese citizens. After all, data is power. The more of it you have, the easier it is to detect patterns and irregularities. In China, information gleaned through social media monitoring is used to control the people and punish those who step out of line. Sadly, this type of monitoring is not restricted to communist nations. In fact, right now, it’s happening in one of the United States’ most populated cities.

Eighty percent of Americans have zero trust in the government. They’re wary of politicians with nefarious agendas. Who can blame them?

Two decades ago, shortly after the Sept. 11 terrorist attacks, the Patriot Act was passed. With the country still in shock, the U.S. government, never known to let a good crisis go to waste, rolled out a comprehensive set of surveillance laws. The new legislation allowed government agencies to spy on American citizens—all in the name of keeping the country safe, of course.

Fast forward to 2021, and the U.S. government is still spying on innocent Americans, 24 hours a day, 7 days a week, 365 days a year. In California, the most illiberal liberal state in the country, First Amendment Rights are being violated. As documents obtained by the Brennan Center for Justice show, the Los Angeles Police Department (LAPD) is now instructed to monitor the online activity of the city’s 4 million residents, regardless of whether or not they happen to be criminal suspects.

In addition to surveilling social media accounts, according to Mary Pat Dwyer, a researcher at the Brennan Center, the LAPD will also use Media Sonar, a cloud-based platform that assists in the collection and analysis of online data. With such a powerful tool, as Dwyer writes, the LAPD will have the ability to “build detailed profiles on individuals and identify links between them.”

More worryingly, as the aforementioned documents highlight, officers are not obliged to report any of the searches they carry out. Without any justification whatsoever, officers can monitor citizens for as long as they want—for hours, days, or even months. Furthermore, the document actively encourages police officers to engage in something called social media “listening.” This involves closely monitoring and analyzing online conversations.

What’s even more bizarre, like something out of an Orwell novel, is that officers are asked to collect social media account information from people they meet on the streets. After being handed a “Field Interview Report Form,” an interviewee is required to provide their name, address, phone number, and email, as well as their Twitter, Facebook, and Instagram account information. This information is then fed into Palantir, an analytic system that allows officers to aggregate data from a whole host of sources. LAPD officers aren’t the only one’s amassing huge amounts of data on unsuspecting citizens. No, it’s happening all across the land.

The United States of Surveillance

The Department of Homeland Security (DHS), which was created 14 months after the Sept. 11 attacks, also collects social media information on Americans. Since 2018, there has been a marked increase in the amount of “geofence” warrants being issued. These reverse-location warrants allow law enforcement agencies to obtain anonymized data from Google. If a person is deemed to have engaged in suspicious behavior, agencies have the power to demand further, far more specific information. It’s not difficult to see how genuine abuses might occur.

In 2019, as Forbes reported, shortly after a crime was committed by one man, Google handed over 1,500 different phone locations to police officers. It’s common knowledge that our data has been bought and sold for years, often without users’ consent. Less known, however, is the fact that the DEA has purchased the smartphone records of American citizens. Billions of calls have been tracked for decades. In the United States, privacy, like Blockbuster and flip phones, is now a thing of the past.

Eight years ago, by leaking highly classified information to the masses, Edward Snowden woke Americans up to the reality of government surveillance. Unperturbed by the revelations, the National Security Agency (NSA), Snowden’s former employer, still spies on Americans. The CIA, another organization with a questionable history, also spies on Americans. To compound matters, Big Tech companies, including the aforementioned Facebook and Google, have probably shared your personal information with at least one of these organizations. With the convergence of Big Tech and government, will the abuses become more or less frequent? I’ll let you decide.