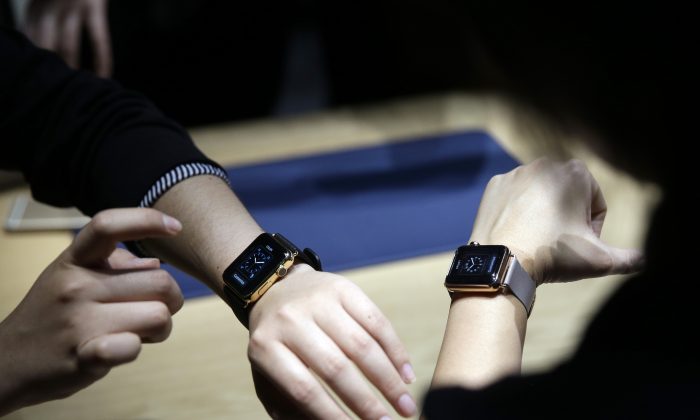 Event attendees get a look at varieties of the new Apple Watch on display in the demo room after an Apple event on Monday, March 9, 2015, in San Francisco. (AP Photo/Eric Risberg)
Business

Your Apple Watch May Soon Be Able to Order Room Service

The Apple Watch had a quiet release in boutiques on Friday, in major cities like Tokyo and Paris. Instead of the usual long lines around dozens of Apple stores waiting for the latest iPhone, a few lines formed for the handful of stores that carried the watch.

This time, Apple promoted the watch as luxury jewelry with beeping notifications. Experts speculate that the different approach is either to create more demand for the product or to better familiarize consumers with the unfamiliar technology by using demonstrations and showrooms. Earlier this month, Apple allowed people to preview the watch and try it on.

The watch has 38 different variations in color and style, and its most expensive option is an 18-karat gold version that starts at $10,000.

More than 3,000 apps are available on the watch, allowing you to do things like check your email, book a flight, or get into a conversation with the watch about what you’re eating. To use the watch, you must already own an iPhone 5 or higher.

Many of the apps seem to be geared toward busy people and health-conscious individuals.

Continuing the luxury theme, many of the apps seem to be geared toward busy people and health-conscious individuals.

A dining app designed by online restaurant reservations company OpenTable allows you to make reservations and actually pay the bill through Apple Pay in participating restaurants.

Marriott Hotels also accept Apple Pay and, through another mobile app on the watch, you can check in and out of the hotel. In the future, hotel guests might also be able to order room service from their watches, or use it to enter their rooms without keys.

Health app Lark lets users speak about what meals they’re having and the artificial intelligence will respond with health tips. For example, you could tell Lark that you’re having bacon and eggs for breakfast and it could respond with “Bacon—that’s three times this week.”

Experts say it will be hard to gauge consumer demand for the watch since it has only been a few days since its release. Knockoffs already sprouted up all around China last week, but they are still very far from the real deal, according to Carolina Milanesi, chief of research at international consumer knowledge company Kantar Worldpanel ComTech.

Apple’s Q1 earnings for 2015 are scheduled to be announced Monday at 2 p.m. Pacific time. Profits for the quarter are expected to be driven by iPhone sales, especially abroad.