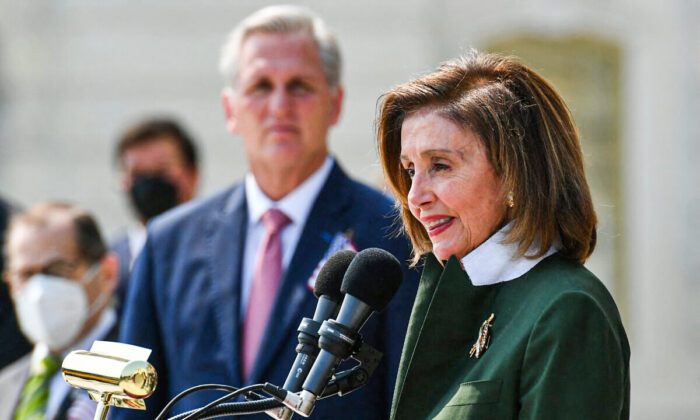 House Speaker Nancy Pelosi (D-Calif.) speaks with House Minority Leader Kevin McCarthy (R-Calif.) and other members of Congress as they take part in a ceremony to commemorate the 20th anniversary of the 9/11 attacks on the steps of the U.S. Capitol in Washington on Sept. 13, 2021. (Mandel Ngan/AFP via Getty Images)
2022 Midterm Elections

House Minority Leader Kevin McCarthy (R-Calif.) said the Republican win in Virginia’s governor’s race on Tuesday shows that many more Democrats are likely in a vulnerable position going into the 2022 elections if they keep voting for ultra-left policies that are not popular with American voters.

“If you’re a Democrat [and] President Biden won your seat by 16 points, you’re in a competitive race next year,” McCarthy said of what he estimated were 70 Democrat-held seats during a press conference on Wednesday. “There’s many that are going to lose their races based upon walking off a cliff from Nancy Pelosi pushing them. She may not care if she loses—she lost 63 the last time she was Speaker, moving policy that the country didn’t care for.”

Chair of the National Republican Campaign Committee (NRCC), Rep. Tom Emmer (R-Minn.), last month said that the Republicans are focused on 57 key districts in their efforts to take back the majority in the 2022 elections, and within that, they are laser-focused on 29 districts where their messaging is more likely to flip the seat in their favor.

McCarthy said his party is listening to parents about wanting a say in their child’s education, instead of doubling down on policies that vilify parents, like the Biden administration’s recent policy to have the Department of Justice assess whether parent’s actions should be taken as domestic terrorism.

He advised the Democratic caucus to begin embracing moderate policies and listening to what voters want. He criticized Speaker Nancy Pelosi for advancing spending and policies that Americans don’t want, and told moderates to break from that agenda if they want to win in 2022.

“I don’t believe that they can be helpful,” McCarthy said. “What I do believe, if they continue to push these policies, it could be one of the biggest election losses for Democrats.”

There have been a handful of moderate Democrats who have publicly said that they will not support trillions in new spending until they have more detail about how it will be paid for.

McCarthy was asked if any moderate Democrats have talked to him about switching political parties, given that some like Rep. Jeff Van Drew (R-N.J.) in 2020 flipped to Republican because he saw Democrat policies, as a whole, as being too extreme.

“He had a competitive race, but he did it because he said the party has left him … I’ve had that discussion with quite a few members on the other side. Don’t be pushed to do something you don’t believe in, because the policies are wrong,” McCarthy said. “You’ve been reluctant right now, but join with us. Our party is open to have other people join us.”

The NRCC on Wednesday echoed McCarthy, saying that the field of vulnerable Democrats has opened and that the committee is now targeting 70 seats for the 2022 House elections, instead of the earlier 57.

“In a cycle like this, no Democrat is safe,” Emmer said. “Voters are rejecting Democrat policies that have caused massive price increases, opened our borders, and spurred a nationwide crime wave.”