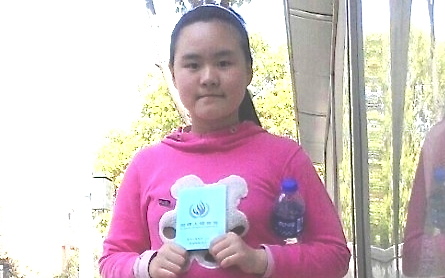 Zhang Lin, a democracy activist in China, and his ten-year-old daughter, Anni, have escaped from house arrest in Anhui Province. In this photo, Anni is holding a copy of the Universal Declaration of Human Rights to express her hope that she will be allowed to return to school. (Screenshot from Internet)
China

After 2 months of house arrest in eastern China’s Anhui Province, Zhang Lin, a well-known Chinese democracy activist, and his young daughter, Anni, escaped in early June and are now in hiding. In a video clip posted on the Internet Zhang said, “My daughter can finally breathe the air of freedom!”

Zhang participated in the 1989 pro-democracy protests on Tiananmen Square and has been subjected to several terms of imprisonment, re-education through labor, and house-arrest.

Zhang’s 10-year-old daughter, Zhang Anni, hasn’t been spared persecution either. On the afternoon of Feb. 27, when she was returning home from school, she was kidnapped by four unidentified persons and taken to the Huposhanzhuang police station where she was detained for 3 hours, during which she wasn’t given food or drink, or adequate clothing in the chilly weather.

Anni was subsequently detained with her father for another 20 hours. After her release from detention, Hubo Primary School in Hefei City, Anhui’s capital, dismissed her, and she had to find another school to attend.

Anni’s story has drawn media attention worldwide. The Deutsche Welle, a German broadcaster, called her “the youngest prisoner of conscience.”

Even though Anni was allowed to attend a school in Bangbu City, a major city in northern Anhui Province and Zhang’s place of birth, her classmates were instructed by the teachers to not speak to her. It has been quite unbearable to her, Zhang said on his video release.

“I think she is too young to shoulder all of this,” he said.

Zhang’s 4-minute-and-42-second video clip was recorded on June 11 and posted on June 18. Zhang said he and Anni lost their freedom when authorities put them under house arrest in April. All they could do was stay at home.

Every time they wanted to go outside, national security guards would question where they were going, obstruct their movements by many means, and closely track them. “These interferences have no legal basis at all,” Zhang said.

The tape does not reveal details of their escape or their whereabouts. Zhang said he was seeking peace and quiet and to temporarily isolate himself from friends to give Anni a chance to resume normal school attendance.

Zhang added that since their escape, they are very happy as nobody is monitoring them. “My daughter can finally breathe the air of freedom and laugh in the sunshine. The next step is to find a quiet place and a school for Anni. No more prison life for her!”

Many former student demonstrators who took part in the 1989 protests against the regime’s repression and corruption struggle with whether or not to tell their children about the military’s bloody crackdown on the unarmed students as they fear retribution from authorities to themselves and their children.

“For most parents, it comes down to a choice between protecting their children from the past or passing on dangerous and bitter truths about the authoritarian society they continue to live under,” The Washington Post said in a June 2 report titled “Witnesses to Tiananmen Square struggle with what to tell their children.”

Leading up to this year’s anniversary of the June 4, 1989 Tiananmen Square Massacre, China’s Tiananmen Mothers, an activist group demanding justice for the victims of the bloody crackdown, have criticized new Party head Xi Jinping for failing to launch political reforms, saying he was taking China “backwards towards Maoist orthodoxy.”

In a statement released on its website, the U.S. State Department also renewed a call for Beijing to account for its crackdown on the pro-democracy demonstrators, saying China should “end harassment of those who participated in the protests and fully account for those killed, detained, or missing.”

Chinese Foreign Ministry spokesman Hong Lei said China had long ago “reached a clear conclusion” about June 4. The successes of the past two decades “shows that the path we have chosen serves the interest of the Chinese people,” Hong added.

Translated by Leo Chen. Written in English by Gisela Sommer.