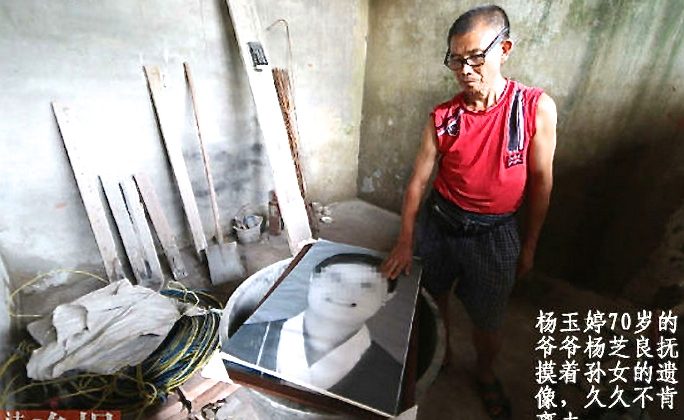 In a screenshot for the Legal Evening News, the grandfather of the 20-year-old Yang Yuying looks at the photo used at her funeral. Yang died from sexual abuse by a retired worker at the China Railway Tenth Group after having dinner with him, accompanying her bosses, on June 29, 2014. (Epoch Times)
China

A 20-year-old girl was killed in a hotel room in the southwestern Chinese city of Chongqing, after she accompanied her bosses for a dinner with several retired staff members on June 30. She died from loss of blood due to sexual abuse with violence, done by one of the retired staff members, police say.

The shocking case was only spread locally on Aug. 18, when the state-run Legal Evening News published an investigative report about it. The report has outraged society.

The victim, Yang Yuting (pseudonym), had just received a bachelor’s degree in Aviation Services from a college in Southwest China’s Chongqing City. She got a part time job at the branch company of a large state-owned enterprise, the China Railway Tenth Group, in Chongqing, planning on earning some money before her new job at an airport in Shanghai started this September, the report says.

Chongqing police told the Legal Evening News that Yang accompanied two colleagues, an office director surnamed Jiang and a project manager surnamed Chen, to have dinner with a few retired employees from the railway company.

One of the retirees, surnamed He, took Yang to his hotel room when Yang was drunk after dinner, and sexually abused her until she died, the police said.

Yang’s uncle, Yang Xiaoping, who is retired from Public Security in the Hechuan District of Chongqing, learned from his friends working on the case that his niece was violently abused with “a variety of means,” causing massive blood loss, the report says. No details of the abuse and injuries were released due to concerns of Yang’s family.

The police released neither the suspect’s full name, nor his position before retirement, which has led many Chinese to speculate that He is a retired high official in the state-owned company.

Suspect He escaped from Chongqing to Xuzhou in Jiangsu Province in the far east of China, but was later captured by police. His driver and one of Yang’s bosses, surnamed Chen, were also arrested, suspected of harboring a fugitive and helping to destroy evidence of the crime.

Whether the dinner was a business dinner or private dinner is controversial.

The China Railway Tenth Group party chief, Zhang Hongchun, said that the dinner was a private dinner hosted by the two employees on their own, because the guests are their hometown fellows. However, Zhang Zheng, the city official involved in the negotiation, said, “Based on our investigation, Jiang (the office director) told Yang that the higher leaders requested her to attend the dinner … They charged the cost of the dinner on the company invoice,” according to the report.

After negotiations, the company agreed to pay Yang’s family 1.3 million yuan (US$211,623) as “work injury” compensation.

Chinese netizens have raised doubts about this compensation, fearing that the company is trying to use the money to decrease the punishment of the suspect.

“Raping and killing can be compensated as work injury with public funding? Can this exist in the earth?” an anonymous netizen commented.

The netizen “Ma Ping” from Beijing remarked, “The procuratorate must be involved and not be influenced by either side. Even if the victim’s family is compensated with 10 billion, it shouldn’t influence the sentence to the criminal. Attempting to use public money as compensation to avoid punishment is the most ridiculous.”

The suspect is under arrest but no information about charges has been released due to the ongoing investigation, the report says.