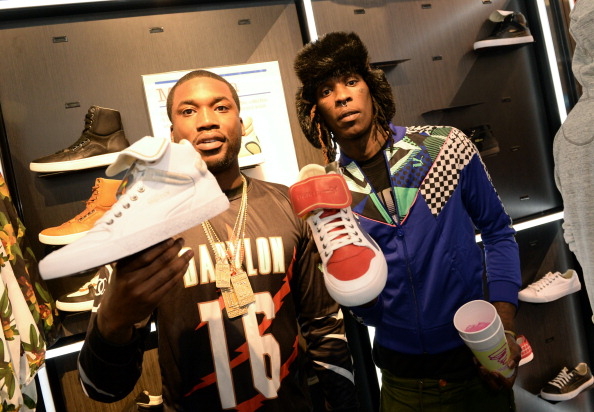 It's just satire. In this photo, Rappers Meek Mill and Young Thug make a special appearance at The PUMA Lab Powered by Foot Locker at Foot Locker at the Gallery at South Dekalb Mall on February 6, 2014 in Atlanta, Georgia. (Photo by Rick Diamond/Getty Images for PUMA)
Entertainment

Young Thug wasn’t hospitalized after being assaulted, but a “satire” website is claiming otherwise.

A fake article is claiming Young Thug, the 21-year-old Atlanta rapper born Jeffrey Williams, was assaulted and taken to the hospital. It was posted to Cream BMP Daily, a “satire” and entertainment website.

A number of people thought the article was real, tweeting about it on Wednesday through Friday.

“CreamBmp.com Written by comedian CREAM. This website is comprised of satire and parody of current news and urban culture. For entertainment purposes only,” the disclaimer for the website says.

Young Thug and Rich Homie Quan released a new track on Thursday, titled “Lifestyle,” which was posted on SoundCloud.

“I done did a lot of [expletive] just to live this here lifestyle,” Young Thug says. “Came from the bottom to the top in this lifestyle.”

And on Thursday, he released an Instagram photo of him and DJ Khaled, captioned, “Gone be a HOT SUMMER STAY RICH.”