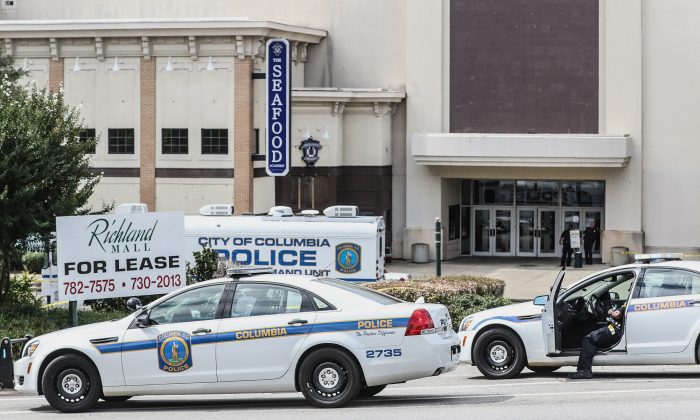 Columbia Police Officers investigate the scene where a Forest Acres Police Officer was fatally shot in the Richland Mall Wednesday, Sept. 30, 2015, in Forest Acres, S.C. Police say a suspect is in custody. (Matt Walsh/The State via AP)
Crime and Incidents

FOREST ACRES, S.C.—The 32-year-old police officer shot and killed while chasing a suspect through a suburban South Carolina mall is being remembered as a generous, community-spirited man who chose to serve the small town where he grew up.

“Our hearts are broken,” a grim Forest Acres Police Chief Gene Sealy said Wednesday as he announced that Officer Gregory Alia had died.

The South Carolina Law Enforcement Division announced Wednesday evening that authorities had charged Jarvis Hall, 34, of Eastover with murder. Hall was scheduled to appear before a magistrate Thursday afternoon at the Richland County Detention Center.

According to arrest warrants, Hall shot Alia with a stolen .40-caliber pistol. He was arrested immediately.

Alia died after being transported to a local hospital from the Richland Mall, Sealy said. He said no other injuries were reported.

The chief said Alia was a seven-year veteran, a new father, and a life-long resident of the Columbia area who had attended a local high school and the University of South Carolina.

“He was an outstanding police officer,” Sealy said. “He was just training a new officer who happened to be with him.”

Sealy said Alia and his wife, Kassy, recently had a baby.

The chief called his group of two dozen officers “one big family.” A few of them stood grim-faced in the back of the room as Sealy spoke. Outside the room, several female staffers dabbed tears from their eyes.

The U.S. flag outside the single-story police building was lowered to half-staff, and local residents began leaving flowers on a police cruiser parked outside the headquarters shortly afterward.

Forest Acres is a tiny residential town completely surrounded by Columbia. Sealy said Alia was responding to a report of a suspicious person in the Richland Mall’s parking lot.

Two officers responded and attempted to talk to the person, who fled on foot and ran inside.

The chief said Alia confronted Hall, there was a struggle, and the officer was shot. He said Hall had a knife as well as the gun, which an arrest warrant said was stolen in neighboring Lexington County in early September.

Records show Hall was arrested in August for failure to stop for a Columbia police officer. It was not clear why he was not in jail; a 30-day sentence he had received wasn’t due to be completed until Oct. 16.

Joan Woodward, 81, who lives next door to Alia’s parents, said she had known him since he was a baby. She said Wednesday she’d just visited with his wife and baby at the parents’ home.

Woodward recalled sneaking candy to Alia when he came to her door as a child, and she called him “a special human being.”

“When my husband died eight years ago, he was so sweet,” she said. “He came and sat with me. God always takes the angels.”

Patrick Walsh of Ruston, Louisiana, said he knew Alia when both were members of the Phi Sigma Kappa fraternity at the University of South Carolina. Walsh said his friend embodied characteristics that would be helpful in law enforcement.

“He was never confrontational. … Serving in the police, that’s an incredible quality to have,” Walsh said.