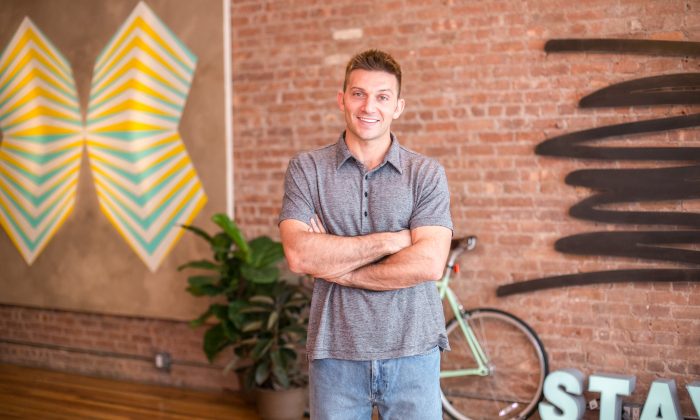 Philip Kafka, founder of Prince Concepts, at his home in the SoHo neighborhood of Manhattan on April 28, 2016. (Benjamin Chasteen/Epoch Times)
Business & Economy

Can Detroit become a great city again? There is hope, as the once-thriving Motor City is attracting investors, entrepreneurs, and artists since its emergence from bankruptcy in 2014.

Philip Kafka, a young entrepreneur from New York, thinks Detroit is a comeback story and offers a unique opportunity to do business.

“I needed to go somewhere that is intrinsically great and has a great brand. I understood how valuable the brand of Detroit is,”  Kafka said.

I needed to go somewhere that is intrinsically great and has a great brand.
— Philip Kafka, Prince Concepts

Kafka, originally from Dallas, moved to New York City after graduating from Northwestern University in 2009 with a degree in philosophy.

While in New York for job interviews, he realized he could use the knowledge from his family’s billboard business. He started to explore the Big Apple by walking and biking in the neighborhoods of Manhattan and Brooklyn.

He started calling the owners of buildings for outdoor advertisement space. After countless calls and trials, he eventually signed his first lease and sold the sign to Corona Beer.

“Immediately, I had the confidence to go and get another deal. I got the second sign on Prince Street, and I sold that to the Museum of Modern Art (MoMA). So I had two signs, and I was in business,” Kafka said.

Kafka founded his New York-based outdoor advertisement company Prince Media and started spending most of his time out on the streets looking for new locations. He focused on untapped areas in lower Manhattan and Brooklyn, leading him to success.

By 2015, Prince Media had 60 leases and was the second-largest billboard company in New York City. In July 2015, Kafka exited the billboard business and turned his focus to Detroit, where he had been investing in real estate for the past four years.

“Every fun ride comes to an end in New York. It was so much fun to get to know the streets. It is magical, and I love this city. But it does not allow me to be creative as I’d like,” Kafka said.

Instead of investing in New York, Kafka turned his attention to Detroit. He first visited Detroit in 2012, and since then, he has been investing in properties in the Motor City.

“In New York, once you start driving in a lane, you have to stay in your lane. You cannot change what you are doing. The cost of living is high, and there is too much competition,” he said. “I started to really see the value in Detroit. It had an amazing story.”

Kafka currently owns six acres of land and six buildings, all contiguous. He says he will convert his properties to creative projects.

One of the buildings was an old auto garage with no roof. He hired an architect from New York and transformed the place into a Thai restaurant called Katoi. Now he is a partner in the restaurant with two other partners.

“The business is better than we could have ever imagined,” Kafka said. He is now working on additional projects.

He is also working on a residential project that will have houses inspired by Quonset huts. He will build 10 houses in the first phase of the project with a plan for further expansion.

“The houses will be voluminous with 18-foot-high ceilings. They are cost efficient and beautiful,” Kafka said.

“If you are a creative person, there is no place like Detroit. Detroit gives young creative people the opportunity to experiment.”

However, there are no quick fixes to the city’s longstanding problems. Kafka visited Detroit 10 times over the span of a year before buying a single garage. It took him a lot of time to understand the city.

He says it is hard for him to see a place that was once the heart of the American automotive industry in its current low state.

“It is sad to see abandoned buildings, broken windows, people in poverty, and racial discrimination. It is really hard sometimes. It challenges your real devotion to your work and tests how badly you want to accomplish your creative vision,” he said.

Kafka cares about his work, believes in what he is doing, and thinks the opportunity is unique. That is enough to make him stick around. He spends more time in Detroit now than in New York.

Race Between Creativity and Money

The value of Kafka’s properties has gone up but Kafka believes the value is directly related to what he does with his properties.

“Speculation doesn’t work in Detroit. I went there to express my creativity. And Detroit allows me to do my projects inexpensively,” he said. “Of course, this is not a hobby. Creativity is only interesting if the business is profitable too.”

There are many creative people from all over the country who are working to be part of the resurgence of Detroit, according to Kafka. In addition, there are many businessmen who are attracted to the growth and investment opportunities.

Gilbert’s interest was an especially decisive factor for many foreign investors looking to move into Detroit. These investors want low prices and excellent returns, according to Kafka.

“A lot of foreign investors, including Chinese, have been investing in Detroit. Their investments are market-based. They do not care about creativity. All they want is a cheap market to put their money in,” he said.

Kafka believes that the direction Detroit takes depends on the predominant culture.

“There is an opportunity depending on who gets control of the city. It could become a mediocre Midwestern city. It could also continue to be like no place else.

“I don’t know which direction Detroit is going to take. It is kind of a race. Let’s just see who gets hold of the city first.”