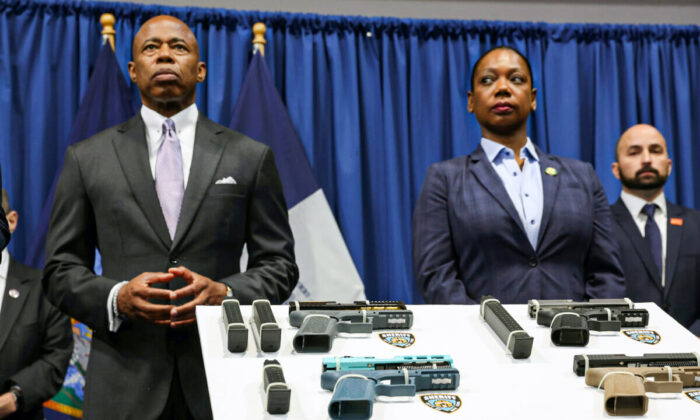 A 20-year-old mother pushing her approximately 3-month-old in a baby stroller was shot dead at “very close range” in New York’s Upper East Side on Wednesday night, police say.

First responders transported the woman to Metropolitan Hospital where she was pronounced dead at 9.20 p.m.

Sewell described the suspect as “an unknown” man who had approached the victim and “fired a single shot in her head from a very close range.”

The suspect fled the scene eastbound along 95th Street and was last seen wearing a hooded sweatshirt and black track pants, she said.

No arrests had been made and Sewell urged anyone with information to come forward.

Watch as @NYCMayor and @NYPDPC provide an update on this evening’s shooting in Manhattan.

‘It Doesn’t Matter If You Are on the Upper East Side’: Mayor

New York City’s mayor declared that authorities were “going to find this person that’s guilty of this horrific crime” and “bring him to justice … to make sure that innocent person receives that justice.”

Adams noted that he and Sewell has only that day spoken with the attorney general and other officials about “ghost guns” and gun trafficking in the city.

He pointed to the young mother’s death as an example of how “readily accessible” guns are and how there is “no fear” in using them on innocent New Yorkers.

“When a mother’s pushing a baby carriage down the block … and is shot at point-blank range; this shows just how this national problem is impacting families,” Adams said.

“It doesn’t matter if you are on the Upper East Side or East New York, Brooklyn,” he said, adding that it made it hard to “fight this issue.”