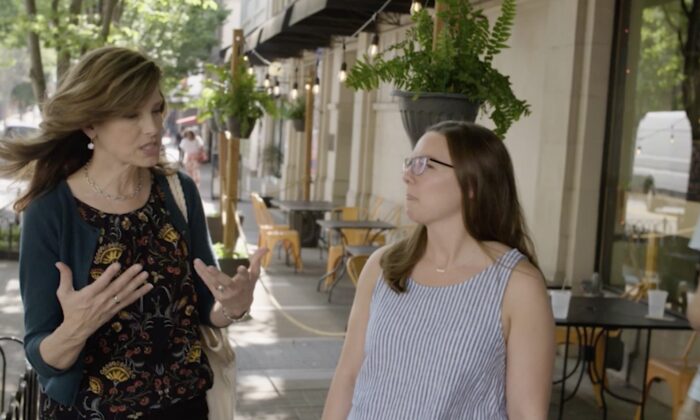 April Few once led a life that made her seem like “a poster child” for liberal attitudes, she says.

Despite growing up in a solid two-parent household with one sibling in South Carolina, Few became promiscuous as a teen and young adult.

She dabbled in homosexuality. She shaved her head and wore masculine-type clothes because “everyone just thought it was the coolest thing,” Few told The Epoch Times in a Sept. 21 interview. “And I was popular.”

She used drugs and alcohol, lost her soccer scholarship, and flunked out of college.

She and her family had been blissfully unaware of any significant flaws plaguing the American education system. They had never thought about the hidden ways schools can powerfully influence young people with belief systems rather than reading, writing, and arithmetic.

Then a metamorphosis happened. Few turned conservative under the influence of motherhood, marriage, and her mother-in-law—who heads a national parental-empowerment organization.

Now 31, Few homeschools her two daughters, ages 6 and 2, based on Christian principles.

And she became dedicated to opening other people’s eyes to hidden agendas that drive policies and programming in public schools.

“Once you learn the truth about American education, there’s no looking back,” Few said. “I would never send my children to public school now, knowing what I know.”

That’s the untold backstory of a documentary, “Truth & Lies in American Education,” produced by a nonprofit organization United States Parents Involved in Education (USPIE) that Few’s mother-in-law, Sheri Few, founded in 2014. It has about 7,000 members.

About 85 people—half in person and half online—watched the film and participated in a discussion with April Few.

One attendee, Leah Cagle, said she hopes the movie “will energize a new wave of involvement … and a new degree of due diligence of school board candidates.”

Betty Overstreet, EmpowerU’s executive director, said: “I thought the documentary was well done and all parents should see it. I give USPIE an A-plus on educating and exposing what is really happening in our government-run schools.”

USPIE spent two years capturing footage with Great Commission Films and raising $150,000 to pay for it. The goal is “to make sure this documentary is viewed by as many Americans as possible,” Sheri Few said.

Although her group includes 22 state chapters, “we are truly a grassroots organization,” Few said.

The group has one part-time paid staffer, April Few, who serves as its communications director in addition to being the “protagonist” of the film.

After the COVID-19 lockdowns enabled parents to see lessons their children were being taught via remote online classes, many parents became aware of Critical Race Theory (CRT), a topic covered in the movie.

Although the movie was in progress before the COVID-era revelations, Sheri Few told The Epoch Times that the timing of its release this year seems right, as parents’ concerns about CRT and sexualization of children have continued to mount.

“We have definitely benefited from the parent outrage around the country, and it’s caused us to grow and become nationally recognized as a leader in the work that we need to do to end the indoctrination of children in this country,” Sheri Few said.

The movie also explores other ideologies that are being propagated in schools but probably remain outside most parents’ awareness, Few said, including other anti-American, pro-Marxist propaganda and “the federal government scheme to try to control the economy through the workforce development model of education.”

As summarized on a web page promoting the film, the U.S. education system seems bent on imbuing children with beliefs such as: “America is racist. Socialism is good. Gender is your choice. Having sex is great. (Just don’t tell mom and dad.)”

April Few said one of the people who inspired her most in the film was actress Sam Sorbo, author of “They’re Your Kids: An Inspirational Journey from Self-Doubter to Home-School Advocate.”

Speaking from experience, Sorbo said she understands that the prospect of educating one’s child can seem daunting. But, she said: “You don’t have to fill your child with a bunch of knowledge. Teach them to learn.”

April Few said she takes to heart a powerful lesson from Sorbo: “Children are a gift from God,” and parents should “open” that gift instead of ceding that honor and responsibility to the schools.

Journalist Alex Newman, a member of the USPIE advisory board, stresses in the movie that few people have any idea how much influence the United Nations Educational Scientific and Cultural Organization (UNESCO) has wielded over American education.

Newman, who has explored the topic for The Epoch Times, says UNESCO has promoted communism, socialism, and early childhood sexuality.

Another interviewee in the movie, Lily Tang Williams, a native of China, warns about data tracking and collection happening in U.S. schools without parental awareness or consent.

“In socialist-communist countries, they believe children belong to the state,” she said.

She said that parents need to regain control of their children’s educations because a key to totalitarian regimes is ” brainwashing” children through “free” education.

Williams wept as she spoke about fleeing communist China in pursuit of freedom in the United States. She despaired about recent trends. As she says on her website: “Now I fear the country I love is becoming the country I left.”

In an interview after the documentary screening, April Few told The Epoch Times that, until she fell in love with Sheri Few’s son, Bobby, “I didn’t even want kids—and I thought marriage was super-oppressive.”

However, April Few became pregnant unexpectedly, got married—and, shortly after that, started helping her mother-in-law with some work for USPIE.

At first, April Few thought that people involved with USPIE “were a little off the deep end,” she says.

April Few had grown up trusting that schools have children’s best interests at heart. But the more Few learned the more she doubted that.

She doesn’t blame the school system for her misguided choices earlier in her life. She says TV, the internet, and the betrayal of an unfaithful boyfriend influenced her.

But she has wondered whether her schooling may have influenced her to believe that her parents “didn’t know anything.”

As she continued to study issues central to USPIE’s work, April Few realized that the truth about American education had been hidden from her, and she became passionate about helping others make similar discoveries.

“I couldn’t ignore what I learned,” she said.

Thus, her mother-in-law understood that telling the story through April Few’s eyes could help other doubters see the truth more clearly. The film doesn’t delve into April Few’s pre-motherhood past but instead focuses on her discoveries since then.

Few says she had no plan to homeschool her children, but now she wouldn’t have it any other way. She said families can choose to live in a smaller, more modest home and can make other choices that allow a parent—or a grandparent—to homeschool children.

“It’s just the greatest thing to be able to see your children grow. It’s so worth it.”

USPIE  has set its sights on abolishing the U.S. Department of Education. However, in the wake of the COVID-19 pandemic, the group decided to temporarily refocus on “emphasizing the important role parents and communities have in the education of children,” its website says.

The group is trying to “encourage parents everywhere to take their children out of government schools and move them to home or private schools.”

USPIE suggests that parents take advantage of resources such as those offered through FreedomProject Academy.