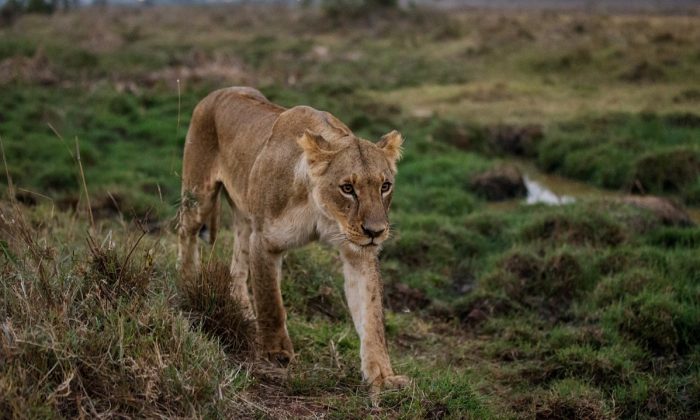 A lion looks on at Nairobi National Park in Nairobi, Kenya on July 11, 2017. (Joosep Martinson/Getty Images for IAAF)
Africa

A lion trapped by a herd of water buffalo narrowly managed to escape, according to a 56-year-old man who witnessed the lion’s ordeal in Nairobi, Kenya.

Lamak Sheik was driving through Nairobi National Park when he saw the life or death standoff.

“I was driving when I saw a herd of buffaloes blocking the road,” Sheik said via Daily Mail. “I saw a young lion on top of the marker post surrounded by buffaloes.”

Video footage captured by Sheik shows the lion surrounded by buffaloes, trapped on the post. Sheik said the situation turned out fortuitous for the lion, who could have been killed by the herd.

“Luckily for the young lion, his two aunts were in the vicinity heard his roars and came to his rescue,” Sheik told the Mail. “They distracted the buffaloes and he managed to escape from the top of the marker post.”

Sheik is a Kenya native, according to his Facebook page. He has many photos of wildlife that he has encountered on his Instagram page.

Photos of the same lion-buffalo standoff show the young lion hissing at the nearby buffalo with an aggressive look on his face, in an attempt to keep them back.

According to the Kenya Wildlife Service, Nairobi National Park is just a short drive from Nairobi’s business district. It contains 100 species of mammals and over 400 species of birds. Other mammals include the endangered black rhino, leopards, cheetahs, hyenas, giraffes, baboons, zebras, and wildebeests, among others. The birds include both migratory and endemic species.

According to the African Wildlife Foundation, the African buffalo is one of the most populous of Africa’s large herbivores. There are four subspecies and the foundation counts the global population of these buffalo at 900,000. Seventy-five percent live in protected areas.

African buffalo live in a large variety of habitats, as long as there is a water source nearby. They live throughout subsaharan Africa, the northern and southern savannah, and the lowland rainforest. They can live 11-22 years in the wild, according to the foundation.

They weigh from 660 to 1,840 pounds, and grow to four or five feet tall. Their predators include humans, lions, leopards, hyenas, and African wild dogs as predators, according to the foundation.

Outside of national parks, they are considered aggressive animals who raid crops. In East Africa they are known to break through fences to get to crops, and possibly for spreading bovine diseases to farm animals.

An African buffalo herd can consist of 1,000 buffalo, usually of mixed gender. Asian buffalo herds are smaller and are segregated by gender, according to Live Science.

African buffalo are protective of each other and guard each other against predators. They also have a tendency to attack humans.