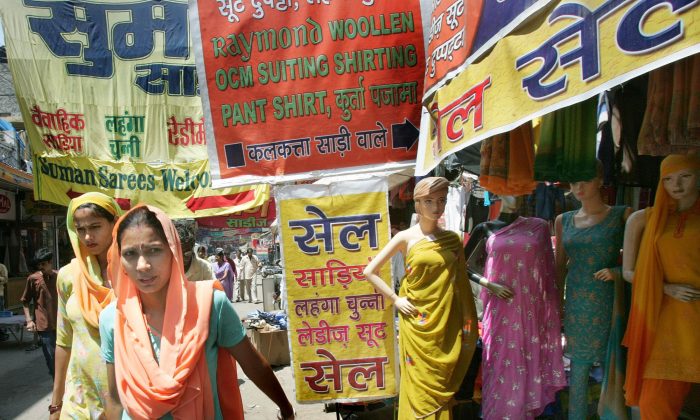 Women walk past a fabric shop at a market in Gurgaon, a suburb of New Delhi, India, Monday, Aug. 1, 2005.Youth in India are increasingly going under the knife to enhance their appearance and improve their self-confidence. (Gurinder Osan/AP Photo)
India

NEW DELHI—With changing concepts of beauty in India and more money to spend on their appearance, Indian youth are increasingly opting for cosmetic surgery to boost their self-confidence.

“The cosmetic surgeries being done now are on boys and girls who are self-reliant and spending the money out of their own pockets,” said Dr. Anup Dhir, the secretary of the Indian Association of Aesthetic Plastic Surgeons.

Dhir specializes in cosmetic surgery of the face and body. According to him, the rise in jobs outsourced from American and European companies has translated to more young people having higher incomes and the desire to appear more competent in the workplace.

“Out of these [professionals], at least 60 percent [of my] patients would say that they want to move up the career ladder,” he said.

According to Dhir, there are also cultural factors that impel young Indians to go under the scalpel.

Marriage in India is still mostly arranged by the parents. The chances of being married into a good family increase the better a child looks. Girls and boys with scars or depressed noses are not considered attractive, and for this reason, these cases are often funded by the parents said Dhir.

Shalini Gupta, 28, had a big scar on her forehead that she had surgically removed. She felt the scar was preventing her from finding the right person, and dampened her confidence at work.

“I gained confidence [after the surgery],” she said. “My way of communicating with people improved.”

Gupta works as a fashion designer in a garment export house and said the most important thing when she talks to people is her face.

According to Dr. Kuldeep Singh, a senior consultant for cosmetic and plastic surgery at the Indraprastha Apollo Hospitals in New Delhi, professionals from fields where there is direct interaction with customers are more likely to get cosmetic surgery.

“Professionals [whose jobs] necessitate media attention and exposure are conscious of their looks and it helps in their professional growth as well,” Singh said in an email.

Ninety million Indians moved to urban locations between 2001 and 2011, according to the World Bank, and another 250 million are expected to urbanize by 2030. This has increased young people’s exposure to advertising as well as media and the Internet.

Singh thinks this is having an effect on young people’s reality.

“[An] Internet-influenced youth is willing to go for corrective cosmetic surgeries. To look good is a priority for them,” he wrote. “Metropolitan culture, round-the-clock marketing of consumables to attract the opposite gender is also a major factor responsible for this trend.”

Dhir said that 10 percent of his patients come to him because they want to look better on social media, a trend that has been dubbed the “Facebook Facelift.”

“When it comes to social media sites, the face is in many cases, is the only physical feature that is photographed,” said Texas-based cosmetic surgeon John Freeman in a blog post. “Since social media has become one of the world’s preferred communication methods, it makes sense that users would want to have only the most flattering pictures of themselves on their personal or professional accounts.”

Freeman said the majority of facelift patients are over 40, but the men and women in their 20s and 30s are also getting facelifts.

Gupta testified that it was very gratifying when she got more than 50 encouraging comments to her profile picture on Facebook after her surgery.