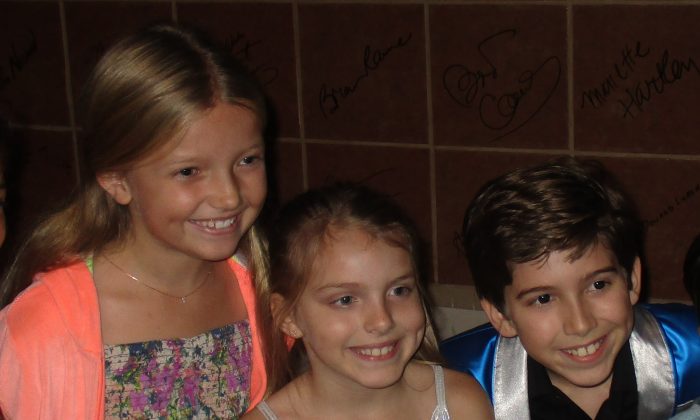 Young Illusionist and His Sister Impress at El Portal

NORTH HOLLYWOOD—There’s something special about watching a magician that elicits childlike awe.

On Saturday, the children themselves became the magicians in a very special performance at El Portal Theatre in North Hollywood.

It was the very first full-length magical act for 10-year-old Kadan Rockett and his 8-year-old sister, Brooklyn, an adorable duo who were among the final 14 performances in the 11th season of America’s Got Talent. Executive Producer Simon Cowell even compared Kadan to Harry Potter.

The Saturday performance was introduced by Kadan and Brooklyn’s father, Bart Rockett, who is a seasoned entertainer. He supplemented the performance with various magic tricks and illusions of his own, since the children, who are accustomed to shorter live appearances on television and movies, are still working on a few new acts.

Over the next three or four months, the children will increase their presence from about half to most of the show, which runs for more than an hour, said Mr. Rockett.

Kadan and Brooklyn performed two notable illusions. The first one, named “Brooklyn’s Revenge,” has Kadan placed in multiple handcuffs inspected by audience members. He’s then locked to a chain and placed behind a curtain while a line of chainsaws inches towards the curtain. Kadan manages to escape just in time, reappearing unscathed.

Tricking the Brain: How Magic Works

In the second illusion, Kadan wears a cape and Groucho Marx glasses and makes six young girls emerge from a suitcase. Then, to top it off, the six girls pull off the costume to reveal Brooklyn, and Kadan reappears behind the audience in a burst of smoke.

Their father’s tricks included a laugh-out-loud ventriloquist act that both children and adults thoroughly enjoyed, along with a very creative vanishing act. He disappeared under a falling white sheet and reappeared at an aquarium in Florida, which could be seen on a large screen remotely via the Internet.

For those skeptical audience members who might have thought it was a pre-recorded video, he asked for a 20 dollar bill from an audience member, recorded the serial number as another audience member read it aloud, and placed it in a glass container before making it disappear and then reappear on the live feed from Florida. The audience was impressed.

The performance both Saturday and Sunday afternoon, Oct. 29 and 30, at El Portal Theatre drew about 150 fans, mostly pre-adolescents and their parents.

The kids have great stage presence, talent, and obviously a lifetime of success awaiting.

For more information, go to elportaltheatre.com.