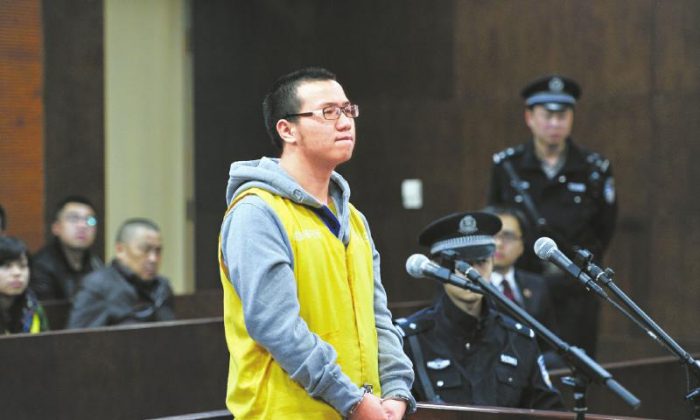 Lei Chunian stands in court with handcuffs during his trial for accusations of the “crimes of fraud, counterfeiting seals of state organs, and forging company seals” on Nov. 3, 2014. Lei was promoted as a "young hero" for saving classmates after the earthquake in Sichuan 2008. (Screenshot/West China Metropolis Daily)
China

A well-known “young hero” who saved seven classmates in the great Sichuan earthquake in 2008 went on trial on Nov. 3 charged with the “crimes of fraud, counterfeiting seals of state organs, and forging company seals,” the Chinese press reported.

Lei Chunian, born in 1992, was labeled as a “young hero” and widely promoted by the state after the magnitude 7.9 earthquake hit Wenchuan in Sichuan Province on May 12, 2008.

He is likely to face over 10 years imprisonment due to “the seriousness of the charges,” the prosecutor says. Lei told the prosecutor that he didn’t have a job, and all the money he gained by cheating others has been squandered, the Sichuan News says.

No family or friends of Lei showed up at the trial, just several victims. The victims told Sichuan News that Lei’s attitude in court was disappointing—they say he did not show any regret for his actions.

Lei became a young celebrity after his story of saving classmates’ lives was intensively promoted six years ago. The Chinese Communist Party (CCP) often chooses to promote heroic figures as a way of burnishing the Party’s image and praising the Party’s leadership.

In the tragic disaster of the Wenchuan Earthquake in which over 87,000 people were killed, such propaganda promoting “young heroes” successfully distracted the public opinion from seeking to hold the government responsible for the disaster.

At the same time, the state sought to keep news of its role in the disaster from public knowledge. Thousands of school children died due to shoddy construction, but reports of poorly built schools were censored from being published in the media.

In the story of Lei’s heroism, when the earthquake started, he ran back upstairs to call his classmates to get out. His action was praised by the state as courageous and selfless, although many Chinese people found Lei’s actions dangerous and inappropriate to do during an earthquake.

“It’s very unreasonable and dangerous. Such actions shouldn’t be encouraged. In school security education books, students are told to run downstairs instead of vice versa… It’s irresponsible to make young children to think such ‘heroic’ action is the norm.” Chinese political commentator and column writer He Sanwei wrote on his blog.

Nonetheless, Lei was honored as 1 of 20 “Earthquake Relief Youth Heroes” by the state, and became one of the torchbearers at the Beijing Olympic Games in 2008. Due to Lei’s honors, he was then accepted by a key high school without examinations, and all his school fees were exempted as well, the Chinese press says.

Chinese state media lined up to report on him, publishing exclusive interviews, and making feature and documentary films about Lei. Lei also gave speeches at multiple state and local organizations.

After such heavy promotion, Lei’s crimes are a slap in the face to the CCP authorities. State Chinese media have tried hard to blame Lei himself for not being able to handle himself well after experiencing such sudden honors and fame, while some Chinese netizens attribute Lei’s actions to the social system that promoted a child to such a position.

“His [Lei] fall is related to making friends with wrong people, lacking persistence, and lacking the necessary life guidance from people… Quick fame and power is the fastest way to ruin someone,” reads a post on the official microblog of the Party mouthpiece People’s Daily.

The boy’s shocking role reversal has attracted much discussion on the Chinese internet, with many netizens reflecting on the communist system, society’s morality, and media reactions to the case.

The netizen “Old man from Xian City” wrote in disagreement with the People’s Daily blog post: “The real criminal is a social environment that encourages impatience, ambition, and quick success. In order to promote the so-called values, they [the authorities] forcibly made an innocent teenager a moral benchmark, and let the adult world corrupt him. The moral benchmark finally fell, and the hero is cast aside.”