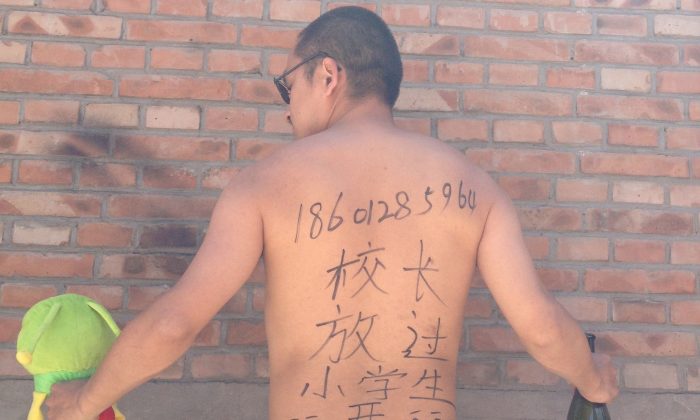 Beijing-based poet Wang Zang poses at his workplace in Beijing with the Chinese characters “Principal, get a room [with me]. Leave the young students alone.” scribbled on his back while holding a stuffed animal and a liquor bottle, on May 29, 2013. Artists, activists, university students, and police officers are photographing themselves—some nude and provocatively posed, some angry and menacing—with the same message. (AP Photo/Courtesy of Wang Zang)
Chinese Regime in Crisis

Nowadays in mainland China, all food is poisonous, and all matters are polluted. Even rivers, wells, and ground water have all been polluted.

In response to this situation, “public servants” of the People’s Republic of China, including central and local officials at all levels, have expanded their own special supply systems of food to protect themselves and their families. The special supplies refer to the specific farms, vegetable-growing centers, and food companies that specially provide vegetables, meats, eggs, and the like to the officials.

Chinese tycoons have learned from the officials. They hire people to grow vegetables and feed livestock for them in order not to eat contaminated foods. Healthy and organic food is better, but it is beyond the reach of ordinary people. Only the rich or the powerful can have such a privilege.

The Chinese Communist Party (CCP) set up the system of “special supply” as early as in the Yan’an Period, when the Party was fighting for its life in the civil war with the Nationalist Party. The system aimed at providing special food and life services to the CCP’s high-class cadres and leaders.

After the CCP gained power in 1949, the system of special supply was nationalized. After Deng Xiaoping’s reform and opening up took hold around 1980, this system was also reformed and opened. That is, officials at all levels have used their power to infinitely expand and enjoy their special needs.

The Chinese public has long been accustomed to these phenomena, and so the privileges, special supplies, or special needs of the cadres have become commonplace. No one dares to challenge this system and risk being charged with undermining “stability” and “harmony.”

Greed has no limits, however. The powerful have expanded their appetites too much and too oddly. If their privileges, special supplies, or special needs only aimed at organic food, corruption, or lust, this would not surprise people. However, now officials want young girls to be specially provided.

Although the official media always strictly controls such “negative news,” in just 20 days in May, the media reported on eight scandals about principals and officials raping young girls.

On May 8, Chen Zaipeng, the principal of Wanning Elementary School in Hainan Province, and local housing officials went to a hotel with six primary school girls to get a room.

On May 15, it was reported that a principal of an elementary in Qianshan County, Anhui Province, with the last name of Yang, had sexually assaulted nine young girls in 12 years.

On May 18, a seven-year-old girl from Shucheng County in Anhui Province was sexually assaulted by a teacher with the last name of Wang.

On May 22, a principal of a primary school in Leizhou, in Guangdong Province, with the last name of Zheng, was reported to have sexually assaulted two young girls.

In addition, young girls were found to have been sexually assaulted in Qingdao, in Shandong Province; in Jiahe, in Hunan Province; and in Tongbo, in Henan Province. The Chinese people believe that the reports that have so far come to light are just the tip of the iceberg.

Law enforcement and officials approach this issue very differently from ordinary folks. The local people are very angry and demand that the police do a detailed investigation and see that the criminals get punished.

The police make excuses, drag out any investigation, and even defend the criminals. The police in Wanning, in Hainan Province, claimed the little girls were not raped even after the parents showed evidence. What is more absurd, the local authorities said, “The little girls went on a date with the principal.”

In 1997, China revised its criminal law and specifically created a new crime, the crime of whoring with a girl under the age of 14. The new law can be understood in this way: If an official rapes a young girl of less than 14 years old, this is not considered to be the crime of rape. Instead, the crime is classified as that of visiting an under-age prostitute. Such an evil law can only be found in China.

The Wanning police apparently think even the crime of whoring with a girl under the age of 14 is too serious. They have changed the charges to suspicion of molesting children. Soon, the rape of six young girls will not even be a crime. It will simply be a moral issue.

In China, no matter what level of official you are, as long as you have some little bit of power, that will be enough. Do not look down upon the power of a school principal, an official in the housing department, or a lead teacher—the children are like small birds in their hands. These petty officials can do whatever they want to the students.

The recent rash of rapes of young girls is said to be due to a ridiculous superstition. Some of the officials believe that having sex with a virgin, producing bleeding from the ruptured hymen, will bring good luck and the opportunity of promotion.

Two years ago, in Xishui, in Guizhou Province, and in Lishui, in Zhejiang Province, there were reports of officials working together with rich businessmen to sexually abuse young girls under 14 years of age.

Last year, in Yongkang, in Zhejiang Province, a case was revealed where a few members of the National People’s Congress from Yongkang were involved in a case of raping a young girl.

Especially alarming is the case of Li Xinli, who is deputy secretary of the People’s Congress in Yongcheng City, in Henan Province, and described as an “excellent CCP member.” According to a report on May 25 by chinalawnews.net, Li raped more than 10 young school girls. The youngest was only 11. This “excellent CCP member” claimed that he only looks for virgins.

A young girl who was a victim told the China Law News reporter that Li forced her into a car, stripped her in the back seat, and then raped her. Li also used his cell phone to video the event and took a photo of the girl’s blood.

The young girl is said to have cried and begged Li, “I am only 13 years old. Don’t do this, Uncle!” [“Uncle” is a term of respect Chinese children use for adult men, not just their own uncles.]

Reading this makes me furious.

When the CCP’s media outlets go on about having a “harmonious society” and the “China dream,” this sounds like black humor in such a society, where unfair, criminal, and perverted behavior goes unchecked in the broad light of day.

Yan Jiawei (born 1937) is a poet who lives in Yibing, in Sichuan Province. Yan was branded as rightist in the 1957 Anti-Rightist Movement and was sentenced to 15 years in prison for the “crime of counter-revolution.” Starting from 2007, Yan joined other surviving “rightists” in writing letters to appeal for the rights of rightists. This article was first published on Human Rights in China Biweekly.