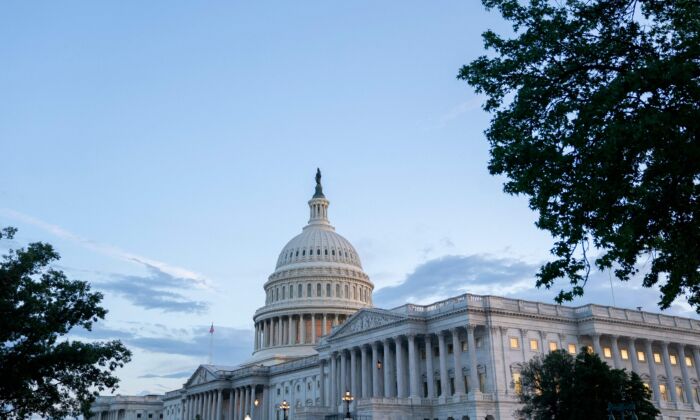 Karoline Leavitt defeated five opponents in the New Hampshire Republican primary on Sept. 13. If elected in November, she would be one of the youngest members of the U.S. Congress. (Stefani Reynolds/AFP via Getty Images)
US

One of the youngest New England candidates seeking office in Washington has won her bid for the Republican nomination for a U.S. House seat representing New Hampshire.

Karoline Leavitt defeated all five of the other candidates, including lead contender Matt Mowers, who was endorsed by then-President Donald Trump in 2020 in his first bid to unseat Rep. Chris Pappas (D-N.H.).

Leavitt will now take on Pappas in November in hopes of taking over his seat in the state’s 1st Congressional District.

On Sept. 14, Trump wrote: “Amazing job by Karoline Leavitt in her great New Hampshire victory. Against all odds, she did it—and will have an even greater victory on Nov. 8. Wonderful energy and wisdom!!!”

In her victory speech, Leavitt wasted no time, taking on her naysayers, many of whom called her too young or too immature to conquer 33-year-old Mowers.

“They said I was too young, we could never raise the money to compete, and that we could never beat a former Republican nominee,” Leavitt said in alluding to Mowers’s win of the Republican ticket against Pappas in 2020.

Mowers, who had other big name endorsements besides Trump for this year’s primary, including former U.S. secretary of state Mike Pompeo, lost to ultra-liberal Pappas by a 5 percent margin.

Leavitt had her own bragging rights, earning endorsements from Sen. Ted Cruz (R-Texas) and Rep. Jim Jordan (R-Ohio), founder of the Freedom Caucus and a Trump ally.

Cruz said he endorsed Leavitt because she has the leadership to “stand up to the Swamp.”

“Karoline is a rising star in the Republican Party who will carry the torch of conservative values for generations to come,” Stefanik said about Leavitt’s candidacy.

Leavitt appears to have beaten out Mowers, a former White House adviser, by about 10 percentage points. Gail Huff Brown, the third-leading Republican in the eight-candidate race, trailed Mowers by less than 8 percentage points, according to the election results so far.

Brown, a former Boston TV anchor, is the wife of Scott Brown, the last Republican to win a U.S. Congressional race in Massachusetts.

Although Mowers had more political credentials, Leavitt’s appeal to New Hampshire may have had something to do with her being a native of the New England state. Mowers is from New Jersey.

In a comment she posted on Twitter following her victory speech, Leavitt said, “We were outspent, but we were not outworked. Thank you to the people of my home district for believing in me! I am humbled by the outpouring of support, and honored to be your #NH01 Republican Nominee.”

Her campaign also seemed to have resonated more with the state’s hard-right Republicans.

Leavitt’s proposals and beliefs include a zero-tolerance policy for illegal immigration and red flag laws that restrict people who are declared incompetent to possess a firearm.

She has also said emphatically that she would vote to impeach President Joe Biden for what she called “dereliction of duty at our southern borders.”

Correction: a previous version of the article incorrectly described an endorsement by Donald Trump. The Epoch Times regrets the error.