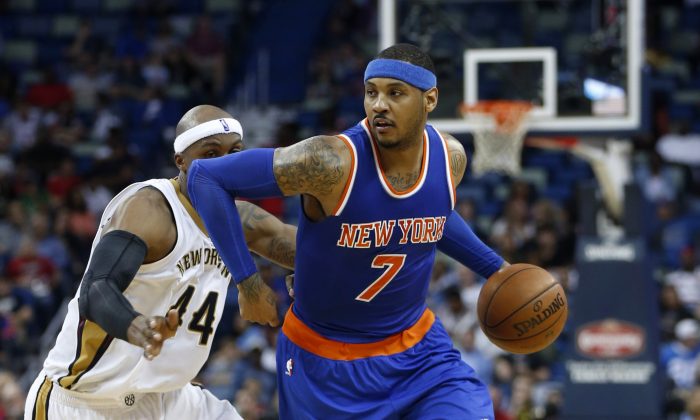 Carmelo Anthony has one fan who can overlook the numbers in the wins and losses column.

The New York Knicks were visiting the New Orleans Pelicans when a young boy decided to take matters into his own hands and meet Anthony, who has taken the brunt of the criticism for the Knicks missing the playoffs for a third straight season.

As the Knicks were down eight points in the game’s final minute, the young boy—who looked to be around 10—broke through security and darted straight to Carmelo Anthony. Startled initially, the 31-year-old superstar then patted the head of the child, who was then ushered back to the stands by referee, Kevin Cutler.

“I was shocked. I didn’t really know who was it until I actually looked over and saw that it was a kid,” said Anthony when explaining his warm response.

The well intended gesture brought attention to security at the Smoothie King Center.

Anthony, though flattered by the actions of his young fan, also acknowledged there was “a security issue, for sure.”

The arena’s chief of security, Russell Bourgeois declined to comment on the incident.

Luckily for the young fan, he did not attempt such a stunt in New York City. The city passed the “Calvin Klein Law” that prohibits fans from walking onto the court, who are subject to arrests and fines if they do. The law came to pass after fashion designer Calvin Klein walked onto the court to engage Latrell Sprewell in conversation during a game at Madison Square Garden in 2003.

This wasn’t the only highlight for Anthony. His alma mater, Syracuse, is currently in the Final Four of the NCAA Championship after defeating Virginia. Anthony congratulated his former team on Snapchat.