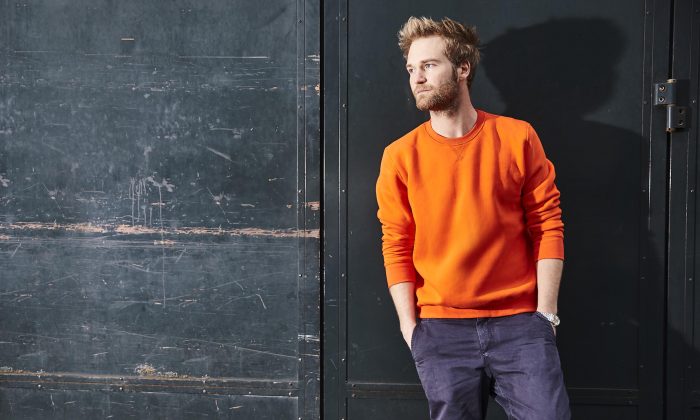 LONDON—If you grew up with a sweatshirt that is still in your closet and looks the same as it did 30 years ago, you are probably missing those days when clothes were made to last.

Cheap, disposable “fast-fashion” pioneered by brands like Zara, H&M, and Forever21 have taught shoppers to settle for low-quality clothes. However, the slow fashion movement is steadily gaining momentum, so it’s now possible to find high quality yet affordable alternatives.

There is a growing number of fashion brands and startups that offer sustainable, long lasting clothes. Tom Cridland, a 25-year-old entrepreneur from London, is one of them.

“I started my business with a 6,000 pound ($8529) government startup loan in 2014. We have specialized in trousers. As I gained more experience in the fashion industry and particularly in menswear, which I believe should be timeless, I learned more about sustainable fashion,” said Cridland, in a phone interview on March 2.

He became very interested in sustainable fashion and wanted to produce timeless sweatshirts. So he launched his 30-year-sweatshirts in June 2015 with a warranty to last for three decades.

He advertised on crowdfunding websites like Kickstarter and Indiegogo to sell his collection. He sold more than 5,000 sweatshirts and shirts within a few months after the launch.

Tom uses a combination of technology, premium fabrics, and old school craftsmanship to make the sweatshirts. “Our craftsmen and seamstresses have been making clothing since 1964 and still have sweatshirts made in the late 1970s in excellent condition, so our 30-year guarantee is no gimmick,” said Tom.

The sweatshirts are made from premium fabric from northern Italy and manufactured by artisans in Portugal. They cost 65 pounds ($92). He has recently launched 30-year-T-shirts and 30-year-jackets as well.

Epoch Times visited Tom Cridland’s flagship store on one of London’s most famous streets, the King’s Road on Feb. 21. The company has no plans to open up other stores. Like most sustainable fashion startups, Tom uses online sales to connect directly with customers all around the world. He can sell his products at relatively reasonable prices by avoiding wholesale and retail middlemen that reap huge markups at the consumer’s expense.

The concept of slow fashion imitates the “slow food movement” that started in 1986. It encourages a shift from quantity to quality and reduces time pressure.

The term “slow fashion” was first coined in 2007 by Kate Fletcher, a professor at London College of Fashion. In one of her articles she defined slow fashion as a different—and more sustainable—future for the textile and clothing industry.

“Fast fashion isn’t really about speed but greed: selling more, making more money. … Yet it doesn’t have to be this way. We can design a different system for ourselves that makes money while respecting the rights of workers and the environment, and produces beautiful and conscientious garments,” wrote Fletcher.

Fashion is the world’s second most polluting industry after oil according to “The True Cost,” a documentary film released in 2015. The film exposes this part of the fashion industry.

According to the film, people purchase 400 percent more clothing today than they did 20 years ago, largely because clothes are low quality and a low price.

The average person in the United States throws away 70 pounds of clothing each year, according to the Council for Textile Recycling. That adds up to about 21 billion pounds of post-consumer textile waste per year. This is more than 5.2 percent of all municipal solid waste generated in the United States.

Cridland wants to be part of this rising industry trend that aims to put an end to the needless cycle of consumption and waste. He believes customers are looking for clothes that carry a good message. That is why he launched his 30-year collection with a “buy less, buy better” message.

“We guarantee a concrete length of time for our clothes rather than using a marketing gimmick like the lifetime guarantee. It encourages people to think about the way they consume fashion. The reaction from customers has really been overwhelming and very touching,” he said.

We are not going to work with Chinese suppliers ever again.
— Tom Cridland

However, good things come with a price. For him, it was not easy to find premium fabrics and craftsmanship. He has toured around Portugal to find more suppliers. “The quality control and production issues are very common for those who work in the fashion industry. Especially small brands will be more than aware of this fact,” he said. He had production issues and delays in Portugal in November 2015 simply because his supplier’s cutter broke. “We had a huge order at the time and did not want to keep our customers waiting. It was with a heavy heart that we decided to outsource the production to China,” said Tom.

It ended up being far more expensive for Tom to get the products made in China on short notice. He also refunded customers who were not happy with the made-in-China label.

“It was really stressful for us. I know what it looks like and there are many cynical people out there. It might look like we are engaging in cost-cutting activity but actually, we incurred more costs in China. We are not going to work with Chinese suppliers ever again,” he said. He wants to keep the production in Europe.

Production in the Portugal facility is back on track, but he learned an important lesson. “We cannot put all our eggs in one basket. We need to make sure we have three to four different suppliers who meet our quality standards and make clothing ethically,” he said. He is currently touring Italy to find other suppliers.

Stories Behind the Clothes

Especially since the collapse of Rana Plaza in Dhaka, Bangladesh, in April 2013, the deadliest garment industry accident in human history, people have become more sensitive to this topic. In addition, more shoppers have started to pay attention to labels after hearing or reading countless stories of made-in-China clothes.

There are also a number of e-commerce sites that promote sustainable fashion like Zady, Huckberry, and Modavanti. These websites share stories on individual brands and how they source and manufacture their products.

Rising consumer awareness and interest in sustainable fashion present a good business opportunity for fashion designers and entrepreneurs. A number of leading retailers are beginning to catch on to the trend like H&M and Urban Outfitters. But experts believe there is still plenty of room for new brands to make a name for themselves.