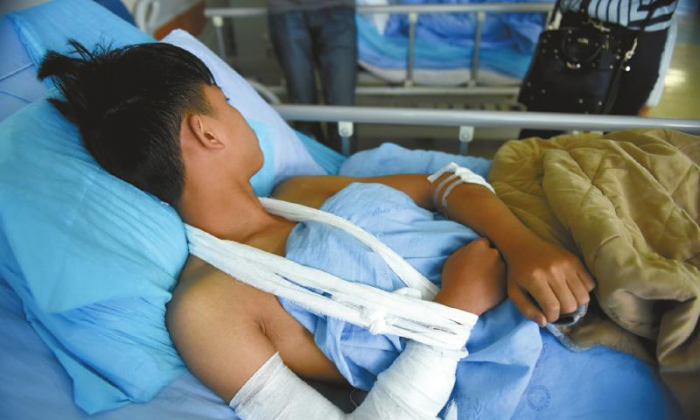 When Li Kai (pseudonym), a student living in southwestern China, bought a snack at a local supermarket, he opened the unprofessionally-labelled bag to find that the food was mushy and appeared inedible.

Li complained to the supermarket management and to factory staff, and was given 1000 yuan (about $150) in compensation, the West China Metropolis Daily reported May 17.

But as he walked out of the management office, Li found that his motorcycle had a flat tire. Aftering pumping it up, he started to go home, but was confronted on the way by four or five unknown men in two cars about half a mile away from the office.

Li was slapped in the face, then one of the men brandished a steel pipe and began to viciously attack Li with it.

Li was knocked out by the assault, which injured his spine, and was taken to a hospital. He believes that the attack was ordered by people from the supermarket or factory management.

“I don’t have bad blood with anyone else,” Li said.

The supermarket denied any involvement in the attack.

Netizens responded to the incident with concern. One user warned that shady behavior in the business world would, “lead to the growth of mafia groups.”