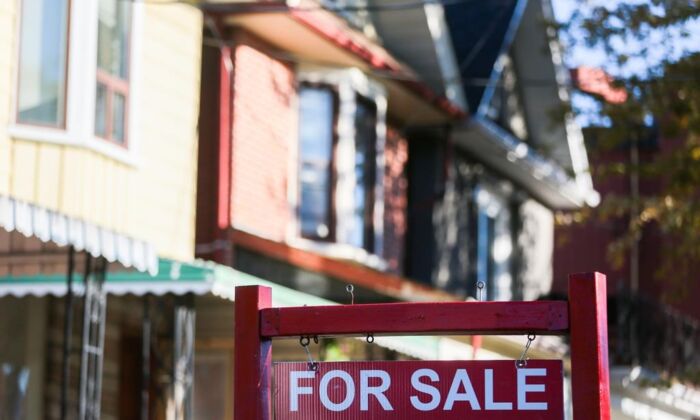 A for sale sign is displayed in front of a house in the Riverdale area of Toronto on Sept. 29, 2021. (Evan Buhler/The Canadian Press)
Canada

The youngest Canadian households saw their wealth decrease for the first time since the start of the COVID-19 pandemic, prompting them to avoid home purchases and reduce financial assets, Statistics Canada says.

A recent report from the agency shows that the average wealth of those in the youngest age group—in which the major income earner is under the age of 35—decreased by 1.4 percent in the fourth quarter of 2021. By contrast, Canadians aged 35 and older—the group that makes the highest income in their households—saw their wealth increase by an average of 0.8 percent.

The report found that Canadian households in the two lowest wealth quintiles are increasing their average net worth faster than those in the wealthiest quintile, with mortgage debt, non-mortgage debt, and financial assets each representing 3, 4.7, and 0.8 percent of their net worth, while real estate and consumer goods each decreased by 4 and 0.7 percent.

Real estate values, in fact, saw little change for the youngest age group in the fourth quarter as they avoided buying homes. Those in this age group also reduced their average debt by 2.8 percent during that period—more than any other age group. The value of their non-pension financial assets, including cash held in savings accounts, mutual funds, and other investments, also decreased by 3.3 percent.

Statistics Canada’s findings echo a Scotiabank survey that says young Canadians continue to put off buying homes amid the high cost of living and economic uncertainty during the pandemic.

“Twice as many Canadians are putting their plans to purchase a home on hold in today’s economic environment, when compared to the first year of the pandemic and the height of uncertainty in 2020,” the bank said in a news release on April 4.

Most millennials are discouraged about homeownership as they grow increasingly concerned about costs of living, rising interest rates, market instability, and economic uncertainty, with 56 percent saying the adverse economic environment is halting their plans to buy a home. Ninety percent say they believe housing prices will continue to rise over the next 12 months, and 62 percent say they are waiting for housing prices to fall before buying a home.

To meet the challenges of housing affordability, the federal government has pledged a roughly $10 billion housing plan over five years in its recent budget.

In a series of housing initiatives, the government says it will double the number of homes built each year for the next decade to roughly 400,000 to meet the demand for 3.5 million homes by 2031.

Foreign buyers are also temporarily banned from purchasing houses in Canada for the next two years. The effectiveness of this policy remains in question, as they currently make up less than 2 percent of the British Columbia market, according to the province’s Housing Minister David Eby.

In its study of the economic well-being of Canadians, Statistics Canada also looked at the indicator of debt-to-income ratio, which reflects the degree to which households are able to service their debt at a given point in time. A reduction in the debt-to-income ratio means that households are more capable of managing their ongoing debt payments, and may be able to absorb additional debt-servicing costs in the future.

While debt remained stable for seniors, the growth in debt has outpaced income for the middle-aged group, with mortgage debt being the primary source of debt increases.