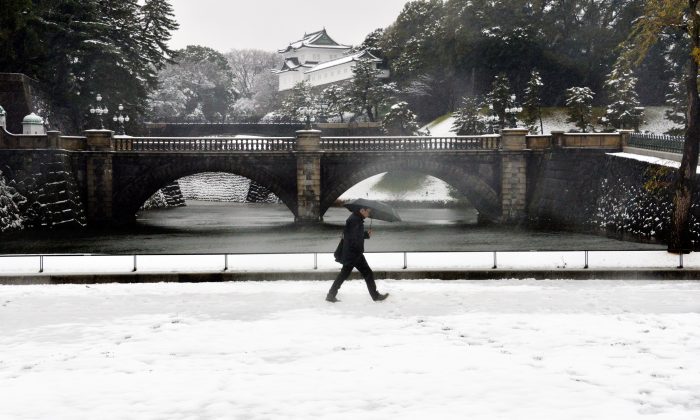 A man walks on a snow covered field in front of the Imperial Palace in Tokyo on January 18, 2016. (YOSHIKAZU TSUNO/AFP/Getty Images)
Canadian Content

Air pollutants cause millions of premature deaths each year around the world. As a result, scientists spend a lot of time studying how it interacts with human environments.

One area of research is how air pollutants interact with air particles like snow. A new study in Environmental Science shows that snow acts like a magnet for pollutants, taking them out of the air.

Scientists from McGill University in Canada simulated the effect in a “snow chamber,” according to Royal Society of Chemistry (RSC). Levels of toxic exhaust compounds like benzene, toluene, and xylene were first measured in the snow. Then, the chamber was exposed to an hour of exhaust fumes.

They found that the level of those toxic compound had risen from close to the “detection limit” to noticeable rates in the snow. One conclusion to draw was that living in a snowy environment was good for your health, as the snow drew the pollutants from the air you breathe, and that countries with snowfall might want to shovel it elsewhere before it melts.

But another is that you probably shouldn’t eat snow or lick the snowballs throw at your face in a snowball fight, so you don’t end up eating air pollutants.

Pesticides also find their way into the snow. Staci Simonich, a research at Oregon State University, found that high-elevation snow in some U.S. National Parks have pesticide levels 100 times of what’s deemed safe for drinking water, according to NPR.