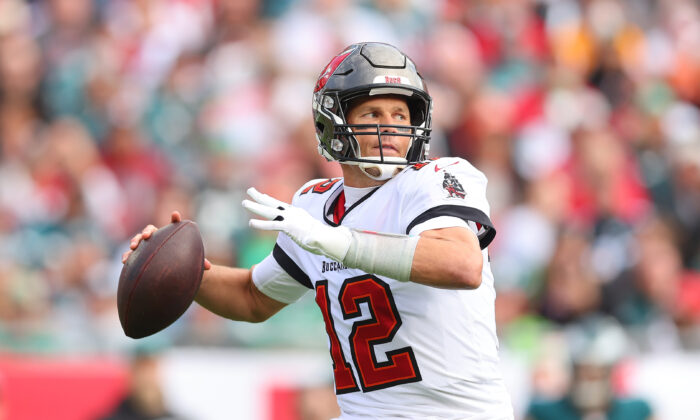 Tom Brady #12 of the Tampa Bay Buccaneers throws a pass against the Philadelphia Eagles in the first half of the NFC Wild Card Playoff game at Raymond James Stadium in Tampa, Fla., on Jan. 16, 2022. (Michael Reaves/Getty Images)
NFL

Tom Brady, arguably the greatest NFL quarterback of all time, indicated after confirming his retirement from the league that he won’t close the door to an eventual future comeback.

Asked by co-host Jim Gray on his “Let’s Go!” podcast about the possibility of returning to football, the quarterback responded that “the best way to put it” is to “never say never,” but noted he feels very good about his decision.

Gray asked Brady that many sports legends such as Michael Jordan, Muhammad Ali, and Mike Tyson returned after initial retirement, also questioning the quarterback if he could potentially go down the same path.

“You know, I’m just gonna take things as they come,” Brady told his co-host during Monday’s show. “At the same time I know that … I feel very good about my decision. I don’t know how I’ll feel six months from now, [if it will] change, it most likely won’t. But I try to make the best possible decision I can in the moment, which I did this last week.”

“Again, I loved playing,” Brady continued. “I’m looking forward to doing things other than playing—that’s as honest as I can be with you there, Jim.”

Brady, a seven-time Super Bowl champion with the New England Patriots and Buccaneers, released a lengthy statement last week to announce his retirement from the NFL after speculation and conflicting reports emerged about the 44-year-old was retiring after the Buccaneers were knocked out of the playoffs earlier in January.

“It’s certainly not that I can’t play or continue to play, but I think there is an important choice for me to make … everything certainly comes at a cost—and the cost is what am I missing in other aspects of my life,” Brady responded during Monday’s podcast on his decision to retire from the sport.

“As you get older, you experience things that are outside of the sport that demand attention and energy … it is time for me to commit to those kinds of things,” he added.

“I am really excited for what’s ahead, and I don’t know what that means or where it takes me, but I know it will be fun and exciting,” he concluded. Brady has also cited a desire to spend more time with his wife, supermodel Gisele Bündchen, and their three children.

During the 2021–2022 season, Brady led the NFL in yards passing (5,316), touchdowns (43), completions (485), and attempts (719). However, the Buccaneers lost at home to the Los Angeles Rams during the divisional round of the playoffs. Last season, Brady led Tampa Bay to their second Super Bowl title in franchise history, defeating the Kansas City Chiefs.

Brady will leave the sport as the career leader in yards passing (84,520) and touchdowns (624). He’s the only player to win more than five Super Bowls and was named the Most Valuable Player, or MVP, of the Super Bowl five times.