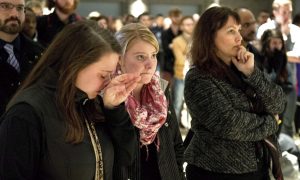 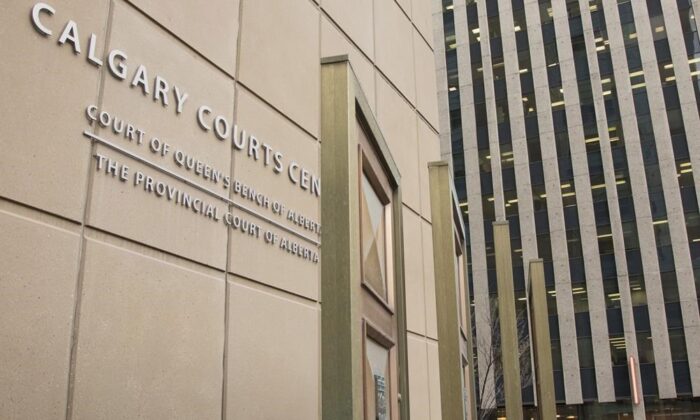 The Calgary Courts Centre in Calgary, Alta., on March 11, 2019. The sister of a Calgary caseworker who was stabbed to death at an assisted-living home last month said Monday she lost her soulmate and doesn't want any other family to suffer the way hers has. Nancy Euwangue, who flew in from London, took in a court appearance for Brandon Newman, 18, who was charged with second-degree murder after the Oct. 25 death of Deborah Onwu. (Jeff McIntosh/The Canadian Press)
Canada

‘You Have Not Broken Us:’ Families Give Statements in Calgary Triple Murder Case

CALGARY—Tears flowed in a courtroom Friday during sentencing arguments for a man who admitted to slitting his girlfriend’s throat and, days later, stabbing to death his mother and stepfather.

“Taylor did not die from a heart defect or an accident. She died directly from a choice that Dustin made,” Toller’s aunt Kim Toller told the Calgary court.

“How broken do you have to be? There was no opportunity to say our goodbyes and remind her of our love for her. At night we all lay awake wondering what her last moments were like,” she said, wiping away tears.

“Was she scared? Did she want her mom? Was she in pain? Did she know she was dying?”

She then directed her comments directly at Duthie.

“Dustin, take this time, learn a new trade, get clean, fight your demons. Apologize, acknowledge and grow. You have not broken us, if that was your goal.”

An agreed statement of facts said Toller, Duthie’s girlfriend of five years, was last seen on video footage from outside her condo unit about 4 a.m. on July 26, 2018. Duthie was captured on the video leaving the condo alone about an hour later.

Police found Toller, 24, five days later with her throat slit and “tucked into her bed as if she was asleep.’’

On the same day she was discovered, Duthie stabbed Boshuk, his mother, six times in their home and covered her with a plastic sheet, the statement said.

It said Pennylegion witnessed Duthie cleaning his mother’s blood in the kitchen and Duthie attacked his stepfather, stabbing him eight times.

Duthie then shaved his head, showered and changed his clothes. About 10:50 a.m. on July 31, he called 911 and confessed to the killings. The document said he was “contemplating ’suicide by cop.’’’

During the sentencing hearing, Duthie and other relatives of the victims sobbed as more impact statements were read.

Pennylegion’s son, David Pennylegion, said he feels “deeply lost, severely depressed” since the killings, and every holiday since has been “lonely and strange.”

“Every day I think about them, miss them, wonder what it would be like to have them around now,” he said.

“I have made a huge attempt to return to a normal life despite all the things Dustin has caused us.”