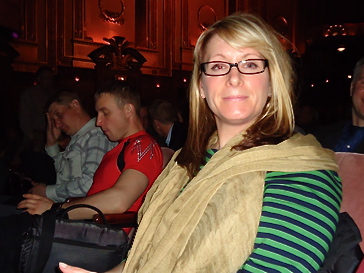 ‘You feel it in your heart and soul’ Says Company President

CHICAGO—Tracy Rowland had only one regret Thursday evening—that her family and colleagues had not joined her to watch Shen Yun. “They are missing out; they should have come. I’m just impressed with how amazing it is. It’s my first time and I just love it!”

New York-based Shen Yun Performing Arts graced the stage of the Civic Opera House April 19, giving the first of five performances in Chicago as part of its Midwest tour this season.

Ms. Rowland, President of Human Capital Consulting, a Chicago based management consulting firm, had high praise for Shen Yun and exclaimed, “I think it’s amazing! It’s beautiful. The costumes are brilliant. The orchestra is eloquent. I am quite impressed. It’s gorgeous!”

She explained that she was profoundly moved by the performances. “I think that what I love is it evokes emotion out of you. You are touched by watching it. You feel it in your heart and soul. It moves you, and that is an amazing thing to have a performance do for you.”

Visibly moved, she elaborated, “Everything! The music with the movement, the costumes, the story. It was a combination of all of the elements that moved me.”

In particular, Ms. Rowland said she was touched by the performance, “The Dafa Practitioner’s Magical Encounter.” In this dance, a young man who displays a banner is assaulted by police; the police meet with divine retribution when fairies intervene.

“It’s just so lovely! The orchestra is absolutely amazing, the sounds are just so intricate and they are so well blended. I mean, just listening to them now, it warms you,” said Ms. Rowland.

She said she was deeply touched by the lyrics of the songs. “The gentleman who did the opera, the baritone, was deeply moving. He was amazing and the pianist is brilliant. It’s just lovely.”

In parting Ms. Rowland recommended Shen Yun to others. “I would recommend anyone to go see this. I would tell them that they are missing out; they should have come.”