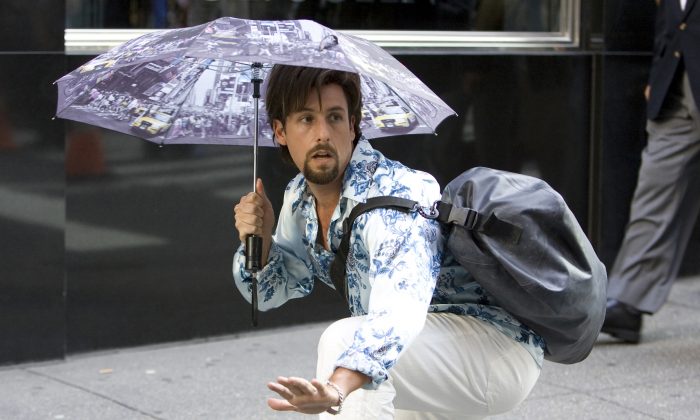 Movie Review: You Don’t Mess With The Zohan

To call this Adam Sandler’s best mirth-maker since The Wedding Singer is faint praise indeed, considering some of the utter dross his infantile brand of comedy has churned out in the interim: The Waterboy, Chuck and Larry, The Longest Yard, and (shudder) Little Nicky. There was the occasional blip of quality that indicated, ego in check, Sandler could be a fine actor, in particular PTA’s Punch Drunk Love, but he returns to familiar lewd and crude territory with this Judd Apatow co-scripted political satire.

When Mossad agent Zohan Dvir (Sandler) gets tired of being Israel’s best counter terrorist weapon—he can swim like a dolphin and has amusing dexterity with his legs—in the fight against Palestinian enemy, The Phantom (John Turturro), he fakes his own death in order to begin a new life as an exuberant hair stylist in New York.

Avoiding the possible controversy, Zohan skirts any real political commentary for a “let’s all just get along” message that sits quite comfortably with the lightweight tone of proceedings. Anything more serious would have been tasteless amongst the “cat keepie-uppies” and jokes aimed at 14-year-old boys.

What makes Zohan different from Sandler’s recent drivel is that his character is genuinely quite affable. Sure he is morally repugnant when it comes to women, but his innocent goofiness is charming and it makes a change from the “squeaky voices” or “angry, repressed everyman” that has littered his back catalogue. He has some genuinely funny moments that at times are Borat-esque, but you try not to snigger whenever he spontaneously bursts into some “disco, disco, disco” or when he takes on a group of terrorists in the excellent opening segment.

It’s when these guilty laughs subside that you’re left with a threadbare plot that survives solely on Sandler’s infectiously silly enthusiasm, which had thus far hidden anything mildly offensive and smothered Dennis Duggan’s uninspired direction. And when you have to wheel on the pneumatic Mariah Carey for your movie-stealing cameo, even The Love Guru might get a little embarrassed.