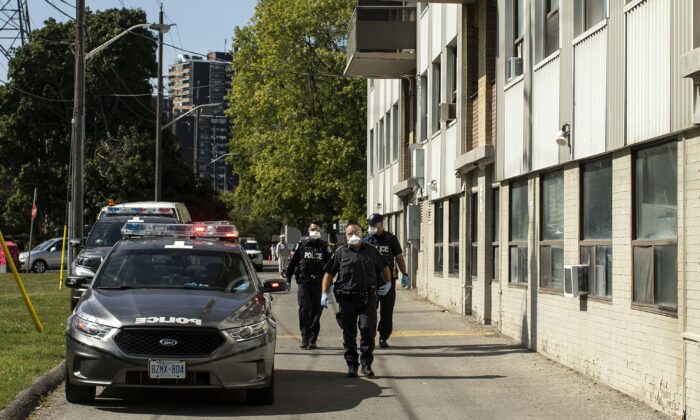 Police officers arrive at a housing development in Toronto to evict a woman who hadn’t paid rent since April, on Sept. 21, 2020, after community activists blocked a sheriff’s attempt to evict her. (The Canadian Press/Chris Young)
Canada

‘You Can’t Get Blood From a Stone’: Residential Landlords Struggling Amid Pandemic

The pandemic has undoubtedly been tough for those who have lost their job and can’t afford to pay rent. But it’s also been a struggle for landlords, who not only have to pay mortgages on rental properties but also have to cope with unpaid rent and tenant confrontations.

“We’ve been hearing so many cases where the tenants are having problems, the landlords are having problems, with things such as divorce and depression and the whole stressful situation,” William Blake, and Ontario landlord and an outspoken member of the  Canadian Landlords Association (CLA), said in an interview.

Blake, a landlord of more than 20 years, says many members have taken to the CLA’s online forum with stories of the difficulties they face.

“The worst thing that we’re hearing is a big increase in small landlord/tenant confrontations [over unpaid rent and evictions]. If the government could come in and just help out during these extraordinary times, these confrontations wouldn’t need to happen.”

He says renewed pandemic restrictions in Manitoba, Toronto, and Ontario’s Peel Region have caused job losses for some and reduced hours for others. He says rental assistance or interest-free loans from provincial governments would help landlords and desperate tenants.

“You can’t get blood from a stone. Sometimes they just don’t have any money, nowhere to go, so they have no choice but to perhaps use the system to prevent themselves from being on the street in winter,” he said.

Landlords with commercial tenants already enjoy such help. In April, the federal government announced the Canada Emergency Commercial Rent Assistance program, which offered six months of forgivable loans to commercial property owners to cover 50 percent of the rent, while tenants paid 25 percent and the owner took a 25 percent loss. The Canada Emergency Rent Subsidy, which extends from Sept. 27 until June 2021, replaced CECRA and does not require landlords to take a cut.

As for residential landlords, Ian Lee, professor of management at Carleton University, suggests that their diverse nature makes it harder to formulate a response.

“It’s a grey area because you’ve got on the one hand landlords that are professional … full-time landlords running a building, two buildings, five buildings, and then you’ve got an awful lot of small operations where one person has a duplex. And then you’re sliding over into individual investments,” Lee said. “So I’m guessing this is why they didn’t announce a program for that sector.”

Lee also noted that a second lockdown would lead to large drops in property values.

“We would see serious unemployment and massive failures of businesses. And I think it would drive the economy into a depression—not a recession, a depression,” he said.

Saskatchewan had a four-month moratorium on evictions that ended in August. Cameron Choquette, executive officer with the Saskatchewan Landlord Association, said many of his over 550 members still haven’t caught up.

“We’re continuing to try and collect the arrears that we had for four months of 2020, and any support from the government in that effort would be welcomed,” he said.

Choquette warned that a second moratorium would create “catastrophic impacts to the rental housing industry because landlords simply cannot afford to take on any more losses this year.”

“So if an eviction moratorium is put in place without government support, it could be disastrous for the health and safety of tenants but also for small and medium-sized landlords,” he said.