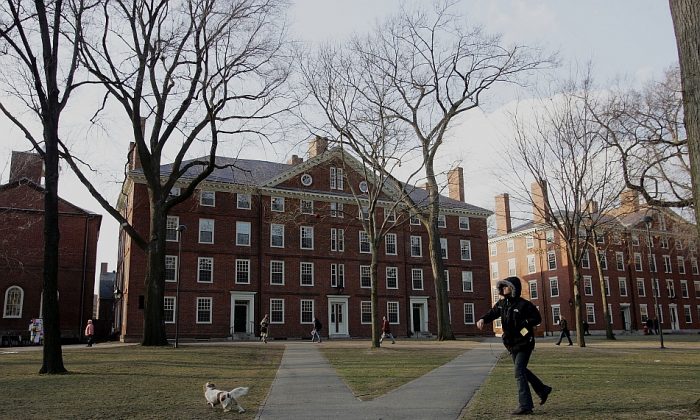 Harvard University students on campus in Cambridge, Mass., on Feb. 21, 2006. The school recently agreed to lower its burden of proof for sexual assault disciplinary cases after an investigation by the OCR. (Joe Raedle/Getty Images)
US

Professors are barred from having “sexual or romantic relationships” with undergrad students at Harvard University, the school announced on Thursday.

The rule change was announced this week and replaced a policy that didn’t ban professor-student relationships outright. The earlier proposal said that the relationships were inappropriate.

“Undergraduates come to college to learn from us,” said Alison Johnson, the Harvard history professor who heads the panel that made up the policy, reported Bloomberg News. “We’re not here to have sexual or romantic relationships with them.”

Relationships between graduate students and undergraduates are banned if the grad student might grade, supervise, or evaluate the undergrad in any way.

A Harvard committee determined that the school’s existing language on “relationships of unequal status” did not meet expectations on what constitutes an “appropriate relationship” between undergraduates and faculty members.

“If you and I are sitting next to each other on a ski lift, and the sparks are flying, and it turns out I’m a professor in the history department, and you’re a senior at the computer science department at Harvard, now we are done,” Johnson told the Boston Globe. “No more sparks. I ski off to the left, and you ski off to the right.”

Harvard officials didn’t say what the punishments would be.

“I’m concerned that placing a blanket prohibition on consensual relationships . . . might lead to, ironically, encouraging them in some way, and making them appear more attractive,” Anita Levy, the associate director of the American Association of University Professors, told the paper.