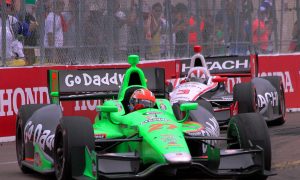 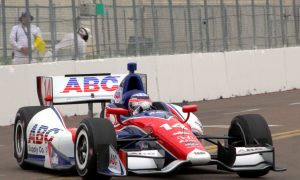 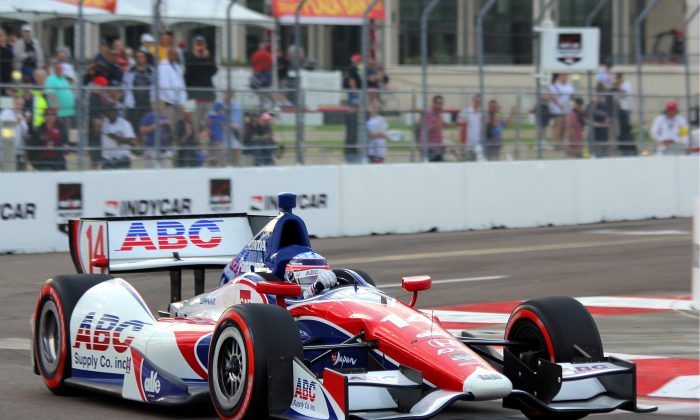 ST. PETERSBURG, Fla.—Takuma Sato is best known for his all-out, attacking driving style. Sometimes it gets him ahead, sometimes it gets him wrecked, but team owner AJ Foyt—himself a rather pugnacious individual—has backed Sato in the #14 ABC Supply car even when Sato ended up in the tire barrier.

It paid off in 2013—Sato earned the team its first pole since 1998 and its first win since 2002. Sato didn’t perform as well in the second half of the season, but Foyt stuck with him, signing the former F1 driver for another season in December 2013.

This time the payoff was immediate: Sato captured the pole for the IndyCar Firestone Grand Prix of St. Petersburg Saturday evening.

In the pits after the final qualifying session to receive the Verizon P1 Pole Award, Sato and the normally irascible AJ Foyt were both beaming. For Foyt, 79, and recently hospitalized for knee- and hip replacements as well as other illnesses, the award was probably the best news in a year. For the 37-year-old Sato it might have been the start of the year the former F1 pilot finally makes his mark in IndyCar.

“It’s a fantastic day,” Sato said at the post-qualifying press conference. “I can’t be really asking for a better start to the season.”

Inclement weather postponed qualifying and very nearly caused it to be canceled, but race organizers kept hope, and by 5:30 p.m.—more than three hours late—a cold front pushed through, clearing the clouds and drying the track.

This was a huge break for Sato. If qualifying had been cancelled, the grid would have lined up according to 2013 championship points.

“Very pleased the league and promoters make possible for the qualifying session this evening because otherwise I would have to start middle of the pack tomorrow,” Sato joked at the press conference.

“It was tricky conditions, as you could see,” Sato said in response to a question about the track’s changing state.. “Quite greasy, to be honest.

“The car balance is dramatically changing because we had sort of like a medium-to-wet setup on the car. Q1, Q2, Q3 we made significant changes on the springs and things like that on pit lane. That was a quick decision, and I think we made it right. That really makes me be able to nail down everything possible on the Q3, the final lap.”

Sato said that switching back to a good dry-weather set-up wouldn’t be hard because they team had two days’ worth of data about the Firestone Black primary tire, and at least a little info on the softer, stickier Red Option tire, which the teams saw for the first time in qualifying Saturday.

“We had a fully dry session for the practice the past two days. We have a good idea where we should be with it dry,” Sato explained. “It’s really great to have a taste of the Firestone red tire with qualifying so we have a good idea for tomorrow.”

The Japanese driver attributed much of his team’s success at St. Pete to hard work over the winter. Foyt Racing spent the off-season analyzing the 2013 season, when he had come out strong and then faded. They then started testing in December, rather than in February, as had been the rule.

Part of the new test schedule was due to the league introducing engine changes, including Honda switching from one to two turbochargers, which seemed to work out for the Honda-powered teams; half the Fast Six used Honda power.

Sato also attributed some of his success t the fact that the entire 2013 crew returned in 2014. The crew knew each other and how best to work together. This showed during the quick changes between sessions.

Of course, starting on pole doesn’t mean that much in any race; and the start at St. Pete has claimed its share of victims. If Sato can get through the first turn he will still have to negotiate St. Pete’s 14 turns 110 times if he wants to see the checkered flag. Still, as Sato commented, “To be starting from the front row in the new season, that’s obviously the best way to start, so I’m very, very pleased.”

Finally one journalist asked what AJ Foyt said to Sato after the driver earned Foyt only his second pole award in 17 years.