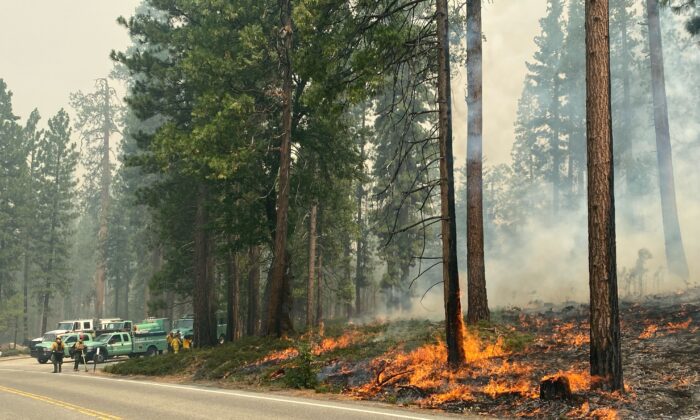 The Washburn Fire burns next to a roadway north of the Wawona Hotel in Yosemite National Park, Calif., on July 11, 2022. (National Park Service via AP)
Northern California

The destructive Washburn fire at Yosemite National Park, which had reached 3,221 acres by Monday evening, was caused by human activities, according to park officials.

Yosemite’s Fire and Aviation team held a public meeting on July 11 informing residents of suppression strategies for the Washburn fire.

“As you all know, there was no lightning on that day. So it’s a human start fire and it’s under investigation,” the park’s Superintendent Cicely Muldoon said. “That’s all I can really say about that right now. We’re looking at that really hard.”

During the meeting, Muldoon also addressed fallen trees and debris from the mono-wind event last year and said the park has been working on a project to reduce fire hazards that may affect local communities.

“We are actively working on a project around the community … We will continue that work soon as it’s safe to be working in there again,” she said.

The fire was reported on Thursday near the Washburn Trail in the Mariposa Grove area of Yosemite National Park.

As of Monday, the fire was 22 percent contained, according to park officials.

The fire was a threat to more than 500 mature sequoias in the park’s Mariposa Grove including the most well-known tree—the Grizzly. In addition, the residents from the nearby community of Wawona were told to evacuate.

Currently, a structure defense group is in place to assess structures and areas that need to be cleaned up around Wawona and put hose lines where appropriate.

“As a threat increases, we increase the resources. We bring in the appropriate resources within this community,” said Matt Ahearn, operations section chief.

Due to the Washburn fire, Yosemite National Park had to close several campgrounds including the popular Wawona Campground located at the southern end of the park.

Many reservations were canceled and refunded due to the closure. Yosemite national park is asking campers with existing reservations to double-check if their campgrounds were affected by the closure.

As other parts of Yosemite remain open, the park is requiring all visitors to have a reservation to enter the park during peak hours—6 a.m. to 4 p.m. every day.