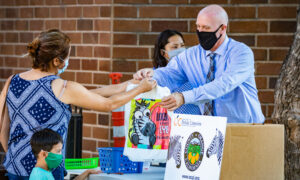 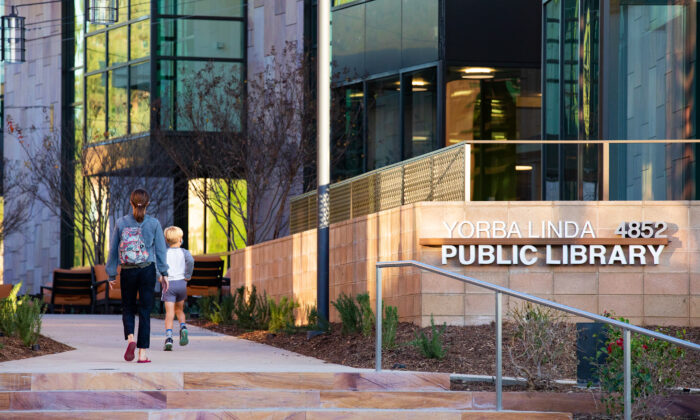 The City of Yorba Linda has opened the doors to a new public library and cultural arts center that promises to provide an engaging community meeting place for local Orange County families.

The two-building complex, located at 4802 Lakeview Ave. on the city’s old “strawberry field” property, opened to the public on Nov. 30 after nearly two years of construction. The new buildings sit three blocks away from the old library, across from the year-old Yorba Linda Town Center retail and entertainment plaza, creating an exciting new destination for Southern California residents.

Geoff Spencer, a management analyst in Yorba Linda’s Communications Division, told The Epoch Times that the city had been saving up to build the new library for nearly 20 years.

“They determined over 20 years ago that they wanted to expand and create a new library, so the library actually started saving up money from their general funds,” said Spencer.

He said the old building had been expanded “a few different times” over the years to accommodate the needs of the growing community before construction for the new facilities broke ground in January 2019.

“We had a study done several years ago that basically determined that our current library we had before wasn’t appropriately sized and wasn’t really serving the needs of the community,” Spencer said.

“It had been built about 50 years ago to serve a certain size population. … Yorba Linda just experienced a lot of growth over the years, and the library was essentially half the size that it needed to be.”

The adjacent 13,500-square-foot cultural arts center hosts a black box theater, an arts studio and adjoining studio arts yard, a dance rehearsal space, and an outdoor events lawn. A central walkway leads between the two buildings, as well as to a ground-level parking lot.

Spencer said the versatility of the cultural arts center’s black box theater—including retractable seating and a movie screen—will provide the library with an exciting new venue for the community.

“Everything’s flexible,” Spencer said. “The movie screen can roll out; the seats can pull back into the wall; we can bring in round tables if we want to. We can have different stage options that can be deployed, depending on what the use is going to be, or no stage at all if that’s helpful.”

He said the venue is set up to accommodate any type of event that people might be interested in hosting, including dance recitals, community arts, and a live community theater group—but not until COVID restrictions are lifted, most likely early next year.

One feature the new library will bring over from the old one is the city’s “beloved” Storytime Theater, a program that hosts a variety of puppet shows for the community.

“It was a feature from our old library theater. … They basically have these puppets and they do all these fun little puppet shows. It’s been big in the community,” Spencer said.

In a press release, Yorba Linda Mayor Dr. Beth Haney called the new facilities “stunning” and said they would soon become “the heart of our City.”

“These are not just buildings; they are the future home of countless memories, creative experiences, and will create new innovative gathering places for our Yorba Linda community. This place truly is a gift and is a testament to the City’s commitment to excellence,” Haney said.

Mike Kudron, the city’s Parks and Recreation director, predicted the new Black Box Theater at the Cultural Arts Center would become a “premier destination in North Orange County for all kinds of events, from dance recitals to community theater.”

“The best thing about a black box theater is the flexibility of seating and state configurations: the possibilities are endless,” Kudron said.

Due to the COVID-19 pandemic, the new library has opened at around 25 percent capacity, taking online reservations for appointments. Each visit is limited to one hour, and all returned library books undergo a five-day holding period before being placed on the racks for availability again.

Spencer said all county libraries are currently operating under the state guidance for retail establishments.

Carrie Lixey, Yorba Linda’s library director, said libraries are “more relevant than ever before.” According to a Gallup poll cited in the news release, more Americans visited libraries than movie theaters in 2019.

“The library is no longer just a place to find books. It has become a dynamic community space with events for all ages, access to non-traditional collections like musical instruments, and so much more. We’ve designed this building to be a welcoming and compelling place for our community to thrive,” Lixey said in the release.

The old Yorba Linda Library is now out of commission.

Spencer said, “It has been closed for over a month now, and that site will be deconstructed.”