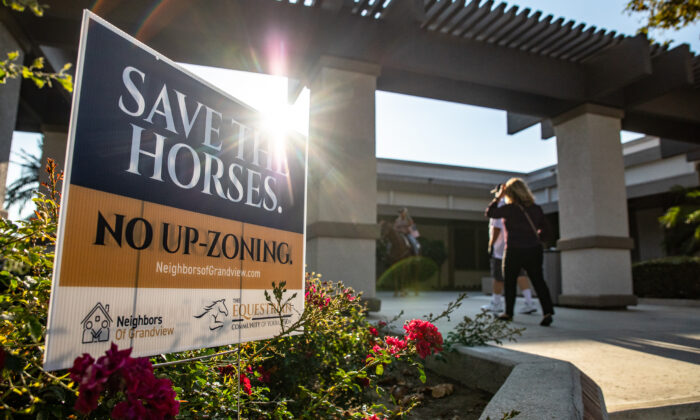 YORBA LINDA, Calif.—City Hall was filled to its maximum capacity Aug. 2 as many residents arrived on horseback just thirty minutes before city officials would meet to discuss state-mandated rezoning plans.

The city council approved a measure for over 20 sites Tuesday night that would be rezoned for housing to go before voters in November; but it postponed taking action on three sites, which included the site the city’s equestrian residents took issue with.

“The problem is the locations that they’ve chosen. We wouldn’t be here tonight if they chose, in our opinion, better locations,” 40-year resident and horse owner Dee Dee Friedrich told The Epoch Times. “Someone’s half-acre to an acre backyard with horses in with future apartments or condos looking into their fences and over their fence is not what we have in mind here.”

As Friedrich stood with her Shetland Pony, named Hope, residents riding and walking over a dozen horses held signs that displayed “save the horses” and “no rezone.”

Yorba Linda is obligated by the state to zone for over 2400 housing units in what is called this “housing cycle,” which dates from 2021 to 2029.

The city does not need to construct the units, but only make space for them.

Failing this, the city risks litigation, fines of up to $600,000 per month, ineligibility for state grants, and state control over local land usage, among other penalties.

“Cities can lose control over their building planning permitting authority, which would allow the state to come in and determine rezoning locations without any local input,” the city’s Community Development Director David Brantley told residents during the meeting.

“As I said earlier, our goal [and] guiding principle was to comply with the law to the least extent necessary to keep us out of trouble and to preserve Yorba Linda to the greatest extent as we can,” Brantley said.

During the meeting, residents including the protesting horse owners filled the council chambers along with an overflow area set up in the city hall.

“As we all know, high-density condominium townhome complexes do not have enough parking, especially for a mom and dad, two kids, and the relatives who come to visit,” 45-year Yorba Linda resident Ed Gunderson told city councilors.

Some residents brought up challenges of water and irrigation for one of the three controversial sites.

Fire safety has also been a reoccurring concern with some residents recalling the 14,000-acre Blue Ridge Fire of 2020, which created traumatic situations for parents as they tried to evacuate their children from local schools.

“It was a Bitter Sweet VICTORY tonight at the Council Meeting, Council voted to take 3 properties out of the housing element that were nearest and dearest to our equestrian hearts,” Friedrich wrote. “Victory for us but sad the other 23 propert[ies] will be pushed through, so I feel bad for those neighbors.”

City councilors will conduct a second reading of the proposed sites. If approved, the city’s voters will see the council’s approved sites on November’s General Election ballot in what is known as Measure B.