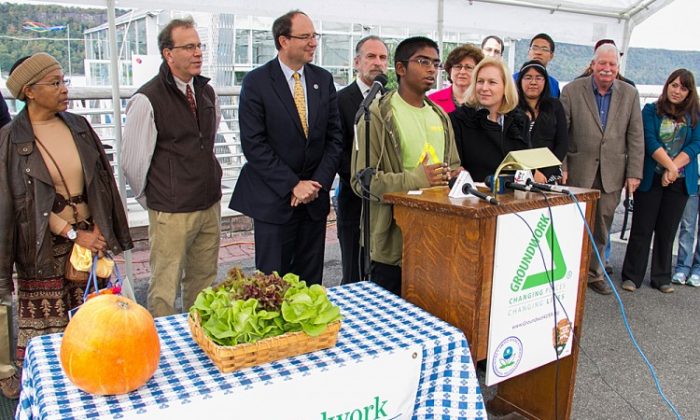 Juliette tomatoes are one of the vine plants grown on the Science Barge in Yonkers, N.Y. (Benjamin Chasteen/The Epoch Times)
US

YONKERS, N.Y.—Youth in Yonkers will benefit from a new training program in hydroponic farming.

“This is an important long term investment into our local community here in Yonkers,” Gillibrand said, referring to the Science Barge, floating behind her off the downtown waterfront of the Hudson River.

Created in 2007, the barge hosted more than 3,000 schoolchildren and New Yorkers while at Chelsea Piers before being moved to Yonkers.

Groundwork Hudson Valley will use federal grant funds to create a new training program for area youth. They will train on the Science Barge.

When Sheikh Uddin, 16, walked by the barge two summers ago, he became intrigued. He began volunteering and later joined the youth Green Team.

The team works on the barge and also at the Saw Mill Farmers Market in downtown Yonkers, which sells products from organic farms within an hour’s drive.

Uddin said his experience has given him a “newfound respect” for farming and his father, who is a former farmer.

Uddin has become versed in modern farming lingo. He explained how the project works, from starting plants in rock wool: “It’s basalt and sand that is heated up and spun similar to the way cotton is, creating a spongy material that holds a lot of water.”

In the later stages of growing, after germination, Uddin said the plants are transferred to a Nutrient Film Technique system, where thin streams of water mixed with nutrients run through the plants’ roots every two hours. Another method involves an aquaponic system, a similar system that replaces buckets of nutrients with a fish holding tank, and replaces nutrients primarily with fish waste.

After his explanation, Uddin searched the Science Barge for mustard greens. “They have a very interesting flavor to them,” he said.

Besides mustard greens (they taste like wasabi, but if picked early enough the zing disappears rather quickly), an impressive variety of plants grow on the barge: greens including red leaf lettuce, vine plants including tomatoes, and English cucumbers, and others such as strawberries and lavender.

The barge incorporates multiple supplies of green energy, including solar panels, windmills, and bio-diesel. This way, when the sun isn’t shining or the wind isn’t blowing, bio-diesel can fill the void. Additionally, energy is stored in 16 car batteries, so excess can be used later.

“The barge is a great place to come if you’re curious about how technology can be integrated to produce food off the grid with no pollution,” said Rick Magder, executive director of Groundwork Hudson Valley and Groundwork USA.

Magder and Groundwork are planning a 10,000-square-foot rooftop greenhouse, Teutonia Farm, close to the barge. The greenhouse would employ graduates of the new training program while utilizing the technology currently seen on the floating educational farm, and would sell produce to local supermarkets, including Fairway.

The cutting-edge techniques, which include irrigating plants solely through rainwater collection and purified river water, provide a blueprint for urban agriculture.

“You could grow food on all the rooftops in urban centers if you use these techniques,” said Magder.

“Then you could just take an elevator up to grab your tomatoes [for] your dinner,” he said.

Yonkers, situated north of the Bronx, is the fourth largest city in the state, with almost 200,000 residents.