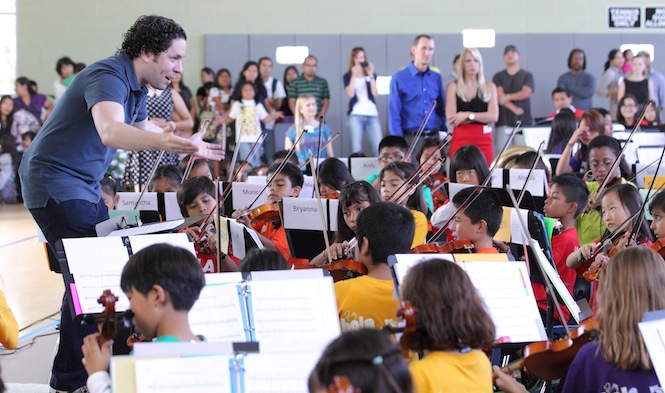 At a holiday concert in Lafayette Park in Los Angeles last December, the Youth Orchestra of Los Angeles at Heart of Los Angeles, known as YOLA at HOLA, performed its heart out to the delight of the audience, comprising mostly parents. “That’s my boy” or “that’s my girl“ gushed the looks on the faces of doting parents, bringing to mind the 1962 movie “The Music Man.”

Presently, YOLA, a program that uses music to develop better futures for youngsters ages 6–17 from underserved communities in Los Angeles, is set for a “really big schu,” as the late Ed Sullivan would say. That big show is at Super Bowl 50 halftime next Sunday at Levi Stadium in Santa Clara, Calif.

The Los Angeles Philharmonic, which partners with YOLA, made the surprise announcement that YOLA is to have a moment in the sun with pop sensation Coldplay and other Grammy Award winners, reported to be Beyoncé and Bruno Mars, on the stage.

“This is a wonderful honor and an extraordinary showcase for YOLA, as well as a tribute to youth orchestras worldwide,” said Gustavo Dudamel, music director of the LA Philharmonic, in a press release. Mr. Dudamel will be leading the youth orchestra.

According to the Los Angeles Times, Coldplay’s lead vocalist Chris Martin, a fan of Classical music and a friend of Mr. Dudamel, was a factor in the Super Bowl inviting Mr. Dudamel and his group. Other efforts to bend the ears of Super Bowl officials, such as an unofficial Facebook page, had been up for a few years. The Facebook site notes that Mr. Dudamel is to Classical music what Tiger Woods is to golf—thanks to him, a heretofore largely patrician, white domain is finally accessible to everyone else.

Founded by Mr. Dudamel in 2007, YOLA is patterned after “El Sistema” (The System), a program established in 1975 by distinguished composer Jose Abreu in Mr. Dudamel’s native Venezuela. The youth orchestra, in essence, represents Mr. Dudamel’s way of not forgetting his own humble origins from which he emerged to become an international figure. He and scores of staff and volunteers contribute not just musical training, but also academic tutoring and enrichment activities.

Between now and the conclusion of Super Bowl 50 halftime, the NFL has imposed strict rules on YOLA participants, which preclude anyone from sharing even the purest, most innocuous of thoughts of how it feels to be one of the chosen few at one of the world’s preeminent parties. The presumption is to error on the side of caution, so that nothing will risk disclosure of secrets on how the show will go on Sunday.

Still, nothing can detract from conjecturing about what may be going through the minds of these youths, whose only requirement to join YOLA was a desire to learn a musical instrument. Generally, in exchange for a commitment to practice, members get a free instrument and lessons. Many who come to YOLA have never held a musical instrument before joining.

Performing at the Super Bowl may well be a crowning glory for YOLA. But some say it’s just the beginning. With social change as the main objective, many of the children in YOLA come from areas marked by gang violence and drug addiction, and where school drop-out rates are high and poverty is an unending cycle.

Based on three sites in Los Angeles—Lafayette Park (downtown), Exposition Park, and the campus at Cal State LA, YOLA holds an impressive achievement of 100 percent high school graduation rates. Several hundred pupils have passed through the system and gone on to higher education and successes in a wide range of fields. The Expo site is the one performing at the Super Bowl.

Like the adage that imitation is the highest form of flattery, YOLA has fired up an abundance of El Sistema-like groups, according to the website of El Sistema USA. “[T]he transformative power of music is galvanizing individuals and groups across the United States and around the world to work in new ways toward the youth development goals we all share,” it says.

Thus the platform is set in Santa Clara to elevate to the world the harmony of youths who have risen above the low achieving label often assigned to them because of their background.

The major unsolved mystery is how the four acts will seamlessly integrate in the short, approximately 20-minute to-do. Clearly, plain Super Bowl halftime shows with marching bands and twirlers are a thing of the distant past; however, in this 50th-year anniversary tilted toward memory lane, the unexpected emergence of YOLA may be a fitting homage to early Super Bowl halftimes when the group “Up With People” attempted to bridge cultural barriers and create global understanding through music.

“When we play,” said Mr. Dudamel in the press statement, “it will be for the youth of the world so they can be inspired to create both a better life for themselves and a better future.”