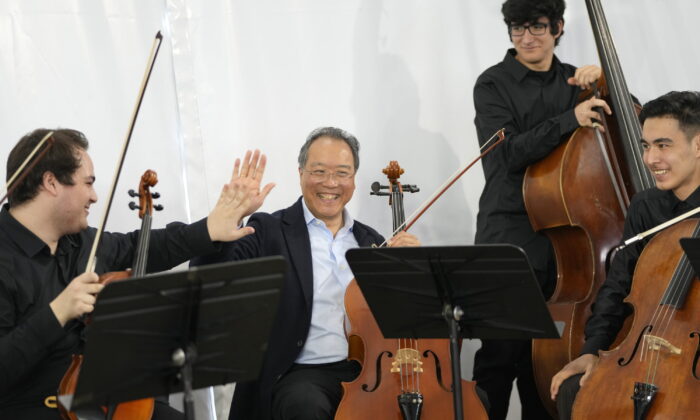 LISBON, Portugal—Celebrated U.S. cellist Yo-Yo Ma joined refugees from the Afghanistan National Institute of Music in the Portuguese capital Lisbon on Tuesday for a performance of Mozart’s Eine kleine Nachtmusik.

Ma joined young Afghan and Portuguese musicians on a small stage at the National Conservatory, where the refugees who arrived last December are studying.

“The best defense against anything is culture,” Ma told the Lisbon audience of dozens of people in a speech.

“They risked their lives for something they believed in and you, in Lisbon, opened your hearts and risked … all kinds of things in order to do what is human,” he said.

Portugal granted asylum to a 273-person group, including some 150 students, from the Afghanistan National Institute of Music as they fled Afghanistan in the wake of a Taliban takeover last August. Ma had a hand in helping them get out of Afghanistan.

The Taliban seized power when the U.S. and NATO ended their 20-year military presence.

Afghanistan has a strong musical tradition, and a pop music scene had flourished there over the past two decades. But many musicians feared for their futures under the Taliban, which rules according to a harsh interpretation of Islamic law.

“The process of integration of our community is going very smoothly here,” Dr. Ahmad Sarmast, the founder and head of Afghanistan National Institute of Music, said.

“The students are enrolled back in the school, they are going to the Conservatory, they are making music, they joined several ensembles and orchestras, they are slowly also beginning to make a wonderful musical impact on their community,” he told The Associated Press on the sidelines of the performance.

Ma and Sarmast exchanged high-fives with the students, some of whom also played traditional instruments of Afghanistan, after the Mozart recital.

Marzia Anwari, a teenage musician from the Afghanistan National Institute of Music, said Ma was approachable and put her at ease.

The plan is to recreate the institute in Portugal, allowing the students to continue their education, as part of a wider Lisbon-based center for Afghan culture that will welcome exiles.