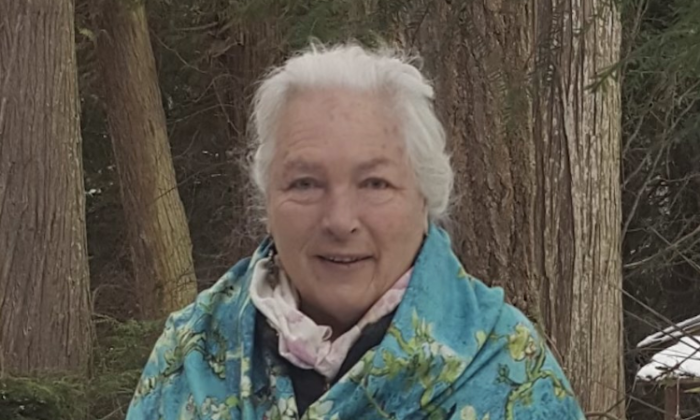 Supporters held a rally on Monday for an 80-year-old woman who was banned for life from a YMCA-run swimming pool in Port Townsend, Wash., for demanding a male employee dressed in a women’s bathing suit leave the women’s locker room where she and others, including a group of little girls, were either naked or undressing.

“Any movement that preaches to women and girls to trust what the strange man tells you about his identity before trusting your own instincts is a predatory movement,” said Amy Sousa, a local psychologist and rape survivor who organized the rally. “To publicly vilify, slander, and shame her for this is unconscionable, and it is abusive.”

In the background, a small crowd booed and shouted chants as Sousa and several others spoke against the practice of allowing men to use areas intended to provide privacy for women.

Julie Jaman, 80, a long-time resident of Port Townsend, Wash., had been swimming at the Olympic Peninsula YMCA’s Mountain View Pool for 35 years, up to the day she found herself paralyzed with fear, she told The Epoch Times, when she heard the voice of a man just outside her shower.

The man has since been identified as Clementine Adams, a YMCA daycare worker who claims to identify as a woman.

Adams was dressed in a one-piece bathing suit that had a ruffle that covered up his genital area, according to Jaman. “When I asked if he had a penis, he told me it was none of my business,” she said.

Jaman, who has a long history as an activist, including helping establish a safe shelter for women and children who were victims of domestic violence, said she thought initially that a pervert or a pedophile had managed to evade people at the YMCA front desk and make into the shower area because Adams appeared to be watching about 5 or 6 young girls pulling down their bathing suits to go to the bathroom while she and other women stood naked in the showers or dressing area.

It turns out that Adams was in charge of the girls and was escorting them to the bathroom.

When she demanded he leave the women’s shower area and locker room, another YMCA worker stepped in and accosted Jaman, yelling at her, “that’s discrimination,” according to Jaman, and issued an on-the-spot directive to her that she was banned for life from the pool and facilities.

The YMCA has not publicly disputed Jaman’s version of the July 26 incident and did not respond to inquiries by The Epoch Times.
A few days after the incident, Adams started a GoFundMe page to raise money to pay for what he called “gender affirmative surgeries.”

Adams initially posted on social media that he was attracted to women, but the post has been deleted.

Adams refers to himself as a college student that plans to major in Elementary Education.

“Being trans isn’t about changing, it’s about living my truth,” he says on the fundraising page.

He also thanked his supporters during a time he stated, “where my safety and privacy are at jeopardy.”

To date, his sex transition fund has collected a little over $14,000.

Port Townsend Mayor Dana Faber and the City Council have since issued a transgender proclamation affirming the state of Washington’s laws protecting transgenders and proclaiming them as an underprivileged class with significant mental health challenges.

Meanwhile, Jaman, who is now without a place to swim and exercise, said she is in “absolute disbelief” that she has been denigrated for having normal and natural instincts as a woman.

“I mean, this was pretty much the typical scenario where rapes happen, and children are molested, and yet somehow I’m the bad guy,” said Jaman.

A string of sexual assaults on women and children have been reported at YMCAs across the U.S. in just the past few years, with dozens more spanning the last two decades.

In 2019, a 21-year-old male YMCA employee was convicted of raping a 3-year-old and 4-year-old, both girls, while they were in his camp classes at the YMCA in Witchita, Kansas.

A 19-year-old male employee who worked in the teen center at the Fulton County YMCA in New York was recently convicted of second-degree sexual abuse of a 12-year-old girl in his camp classes.

Several YMCAs have also been the subject of multimillion-dollar lawsuits for sexual assaults at their facilities.

The YMCA in Rochester, Minnesota, is currently the subject of a lawsuit filed by a woman who claims she and her twin sister were sexually assaulted by a 15-year-old male at the facility in 2018.

The lawsuit alleges the YMCA “breached its duty of care and protection and failed to protect [the woman] from harm by creating an unsafe environment where customers are inadequately supervised during routine activities.”

In 2014, 10-year-old Pamela Powers was abducted from the Des Moines YMCA in Iowa and then murdered by Robert Anthony Williams, who followed her into the women’s bathroom at the Y after her mother told her to wash her hands.