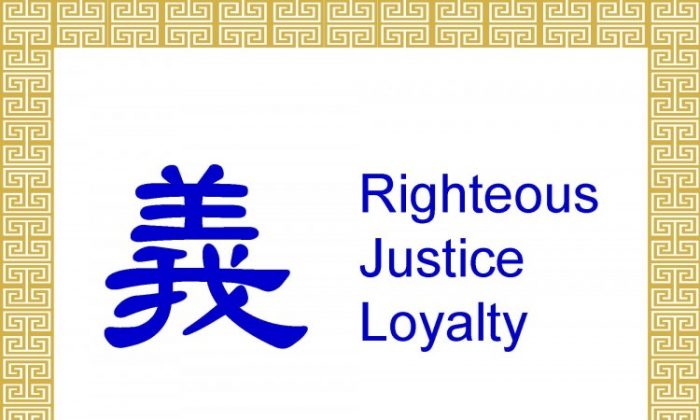 The character for righteousness; justice; or loyalty. (Thomas Choo)
China

The symbol 義 has broad inner content, and includes values such as justice, honesty, loyalty, and reliability. Pronounced as Yi, it is composed of 羊 (sheep) on top and 我 (I, myself) on the bottom.

The sheep,羊, is obedient and kind, and mutton tastes good and is nutritious. Given those characteristics, the sheep is considered to be a symbol for good luck and prosperity.

The character 我 was originally developed from the oracle bone script where it denoted a fighting implement with a sharp tooth, although it later meant “I” or “myself.”

羊 and 我 combined to make義 can be literally interpreted literally to signify “I am a sheep.”

In ancient China, a sheep or lamb was sacrificed to honor the Gods. The character’s intrinsic meaning is that, in regard to this ritual, one can make sacrifices in the name of justice or righteousness.

The Chinese character 義 reminds people how they should conduct their lives; that is, selflessly.

Yi ( 義) belongs to a special category of ideograms called huiyi (multiple meanings brought together). They are composed of ideograms with different meanings and their inner contents are a fusion of the several meanings.