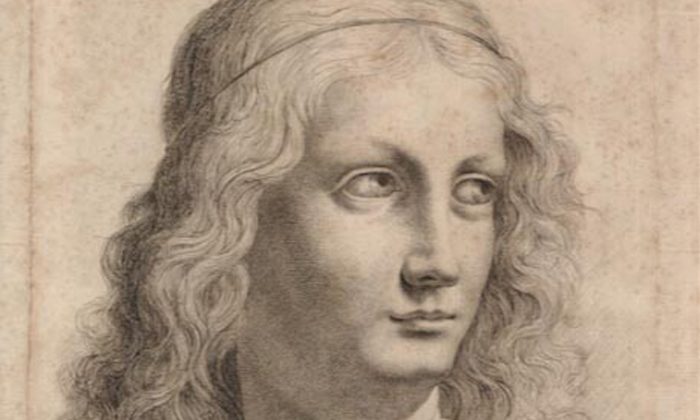 This engraving by Girolomo Mantelli may be a copy of a lost da Vinci. (Courtesy collection of Abel Landrum)
Art Speaks

Yet Another Lost da Vinci?

Yet another lost da Vinci artwork may be awaiting discovery somewhere in Europe. In recent weeks a portrait, of Isabella d’Este, has been discovered in a bank vault in Switzerland and the Italian press is reporting that a mural by da Vinci has been discovered beneath layers of plaster at the Sforzesco Castle.

Are there other works awaiting discovery? An 18th century engraving by obscure artist Girolamo Mantelli suggests that at least one portrait may come to light—if it has not been destroyed since the 1780s when Mantelli copied it.

Girolamo Mantelli is not high on a list of desirable late 18th century engravers. His works are few, but of excellent quality. And at auction his prints bring anywhere $100 to $300 depending upon subject and condition.

Two copies of one plate engraved by the artist are now attracting attention in light of the recent discoveries. The engraving is of a portrait of a woman and shows the kind of detail normally present in a da Vinci portrait—as opposed to a sketch.

Only two examples of the engraving have appeared publicly and they may well be the only ones now in existence. One is at the Harvard Art Museum and the other is in a private American collection. They were made in the last decade of the 18th century, probably at Cannobio on Lake Maggiore where Mantelli lived, possibly from 1734 to 1808.

The owner of the one private copy of the engraving wishes to remain anonymous.

He states, “The print was acquired in 1972 from the 19th century collection of Charles T. Yerkes, a Chicago trolley car magnate. It immediately struck me as too detailed to be a copy of a sketch. I am convinced it was taken from a portrait that is still buried somewhere in Italy.”

The portrait of Isabella d’Este has been seen before as a colored preparatory drawing. The Mantelli image has never appeared in any published study of da Vinci’s works.

Mark Newell is a writer, anthropologist, and award-winning graphic artist with an interest in the history of art and especially the Medieval and Renaissance periods. He can be reached at marknewell@mac.com