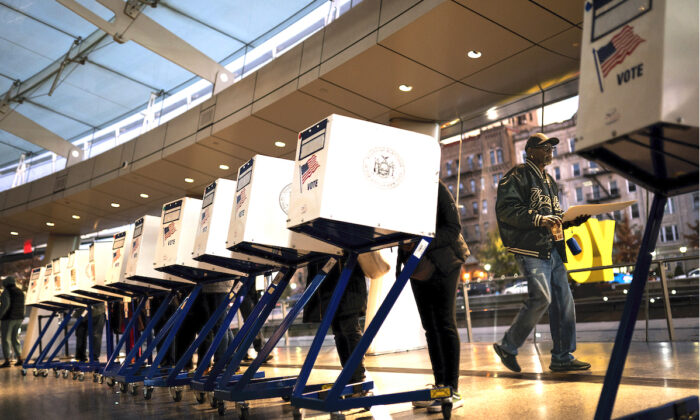 The first voters of the day begin filling out their ballots at a polling site in the Brooklyn Museum as the doors open for the midterm election in the Brooklyn borough of New York City on Nov. 8, 2022. (John Minchillo/AP Photo)
Viewpoints

Yes, There Is a Silver Lining for Republicans

The pundit class is already working overtime explaining how voters barely changed Congress—no predicted red wave in evidence—when some 75 percent of those same voters, in exit polls, said the country was headed in the wrong direction.

An epidemic of schizophrenia to dwarf COVID-19?

Or some simpler explanation such as:

former President Donald Trump opening his mouth one too many times…

But on to the silver lining promised in the headline.

The reason is simple why 2022 isn’t and never was a great year for a Republican sweep. The next couple of years are going to be an economic train wreck.

Even though the stimulus for this wreck (literally unhinged energy policies, massive overspending and giveaways leading to inflation, and open borders with a fentanyl epidemic) are entirely Biden and his administration’s doing, don’t expect the public to always suss this out. The people need help.

You think things are bad now? It’s only going to get worse. If you want to win in 2024, which will include a presidential election plus a configuration of Senate seats vastly favorable to the GOP, and would change things more significantly than 2022, it’s best not to be seen as responsible for the coming debacle, at least to the extent possible.

People are debating whether we are in a recession now. In a year, they won’t be.

And speaking of presidential politics, perhaps it’s inevitable but we are already seeing somewhat braindead sparring between Trump and Ron DeSantis.

Listen, guys, compared to the current White House occupant, you’re both Marcus Aurelius, but for the sake of the country, not yourselves, dial this stuff down as long as possible. It isn’t attractive.