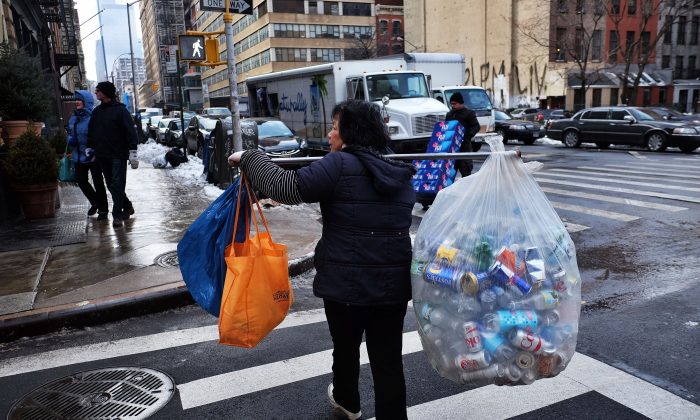 A woman balances a load of recyclable cans and bottles she collected from trash cans to sell in Manhattan on Jan. 30, 2015. New claims for U.S. unemployment insurance benefits plunged to the lowest level in nearly 15 years, the Labor Department reported. (Jewel Samad/AFP/Getty Images)
Opinion

Yes, the Economy May Be Creating Jobs, but the Pace Is Slowing

The economy added 257,000 jobs in January, down significantly from the 324,000 fourth-quarter average monthly gain.

Overall, the economy is creating jobs, but lower oil prices and a strong dollar are slowing the pace.

Unemployment rose a notch to 5.7 percent, but that understates the jobless problem, because so many fewer adults are active in the job market than prior to the financial crisis.

The oil and gas sector and industries supporting resource extraction shed jobs, and those layoffs are just beginning. Also in the negative column were transportation, temporary business services, and the government sector.

Hourly earnings rose 0.5 percent after losing ground in December. Wage pressures appear to be mounting at the lower end of the pay scale, as employers such as Aetna, Gap, Hobby Lobby, and Starbucks announced pay increases.

However, with imports pushing down prices and the economy slowing, these pressures may relent.

Separately, the Commerce Department reported that weak oil prices pushed down the value of U.S. refinery exports and a strong dollar pushed up imports of manufacturers in December, the latest month for which data were available.

Reflecting a larger-than-anticipated trade deficit, fourth-quarter gross domestic products will likely be revised down sharply from the 2.6 percent advance estimate published the last week of January. Also, many forecasters will be marking down estimates for first-quarter growth.

Consumer spending, which accounts for nearly 70 percent of GDP, continues to grow at a decent pace. Household balance sheets have improved since the financial crisis, with housing and stock prices up and many families having worked off credit card debt, but those tough times have changed habits.

Whereas oil companies have cut back on drilling activity and employment, a large gain in consumer spending expected from lower gas prices has so far not materialized.

The official jobless rate is down from its recession peak of 10 percent because so many adults have quit looking for work. If the same percentage of adults were employed or looking for work today as when Presidents Barack Obama or George W. Bush took office, the jobless rate would be nearly 9 percent and 11 percent, respectively.

Nearly 1 in 6 men between 25 and 54—too old for college and too young to retire—are jobless. Nearly 1 in 8 aren’t even trying to find work, and most may never work again.

Forming a new leisure class, many men simply sit home, watch ESPN, chat with friends on the Internet, and rely on government benefits, charities, and friends and relatives. Some work off the books and go unrecorded in the black-market economy, but most are simply idle.

Immigrants, who have captured the lion share of jobs created in recent years, have pushed down wages, especially for high school graduates who count large among the army of idle men. But the expansion of Medicaid, food stamps, and other income support programs make it easier for many not to work.

In 2015, the $500 billion trade deficit reduces U.S. GDP by about 5 percent. That would translate into 4 million jobs directly and another 3 million after the earnings of businesses and workers recycle throughout the economy.

In addition, the deficit cuts deeply into activities in manufacturing and high-tech that undertake most of the research and development, create intellectual property, and drive growth. But for the trade deficit, U.S. economic growth would be in the range of 4 percent to 5 percent instead of the 2 percent averaged since the beginning of this century.

Free-trade agreements are a fool’s journey for Americans. With so many prime-aged men jobless, real annual household incomes have fallen to about $52,100, from $56,900 in 1999.