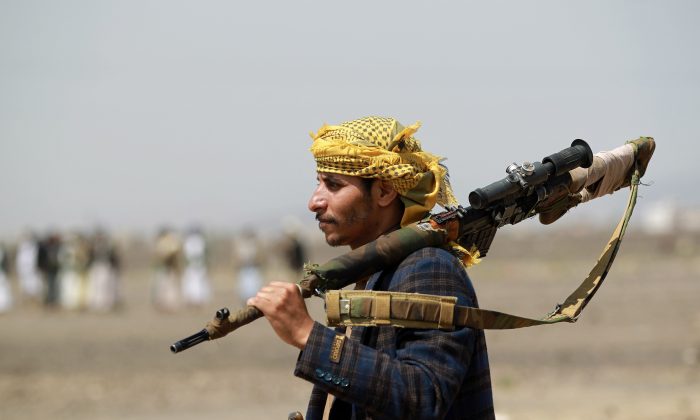 An armed Yemeni man loyal to the Shiite Houthi movement holds his gun during a tribal gathering against al-Qaeda militants in the Bani al-Harith area, north of Sanaa, on Aug. 17, 2014. Yemen faces multiple domestic problems, including ongoing insecurity and insurgencies posed by Shiite Houthi fighters, southern separatists and the al-Qaeda in the Arabian Peninsula (AQAP). (Mohammed Huwais/AFP/Getty Images)
Middle East

A month after the Houthi conquest of Sana, Yemen’s new political landscape remains uncharted. In Sana, the Houthi leadership is trying to coax Yemen’s political elite into a coalition government, while south of Sana, Houthi forces are pressing to consolidate their military power on the ground. Both efforts are encountering considerable resistance, but the Houthis may prevail still.

Here the Houthi leadership has its best chance of success, as Yemen’s political elite seems gradually to reconcile itself to the Houthi presence, and the international backers appear to view the formation of a government, even under Houthi guns, as critical to Yemen’s future. Indeed, the United States, the United Nations, and European backers seem to see the best chance for Yemen in forming a government and holding the Houthi leadership to the letter of the Peace and National Partnership Agreement, which stipulates, among other things, the withdrawal of militias from the cities.

But despite this fact, as well as that President Hadi appointed a new prime minister and that intense negotiations are under way to form a new government, many political leaders in Sana are hesitant to participate in a Houthi-dominated government. The Islah Party-led opposition coalition of the Joint Meeting Parties (JMP) and southerners are chief among these.

The proposed distribution of ministries in the new government reflects the new balance of power in Yemen: The Houthis control six ministries, the southern Hirak six, the former ruling party of Ali Abdullah Saleh nine, and the JMP will name nine ministers. President Hadi controls the four key ministries of defense, foreign affairs, interior, and finance. However, the JMP has yet to accept the invitation to join the new government, and it may well sit out this round of government.

Indeed, when the southern movement gathered in Aden on October 14 to celebrate the fifty-second anniversary of the launching of the liberation struggle against the British, demonstrators sent Houthi representatives home and burned pictures of the Houthi leader. Thus, any new government will be fraught with internal tensions.

On the military front, the Houthi militia settled into Sana, then spread west to Hodeidah on the Red Sea coast, east to Marib in the desert, and south to Ibb, Taiz, and Bayda in the middle regions between Aden and Sana. The Houthi militia met little resistance until it reached Taiz and Rada. In Taiz, Yemen’s capital of the middle regions, the mayor convinced the Houthis not to enter the city.

General al-Subaihi, commander of the fourth military region that includes the key cities of Taiz and Aden, forcefully stated that the Yemeni military was in charge of security and that he would not allow militias in the area. The Houthis respected Subaihi’s assertion of state power in the vicinity.

Charles Schmitz is a scholar at the Middle East Institute and an associate professor of geography at Towson University.