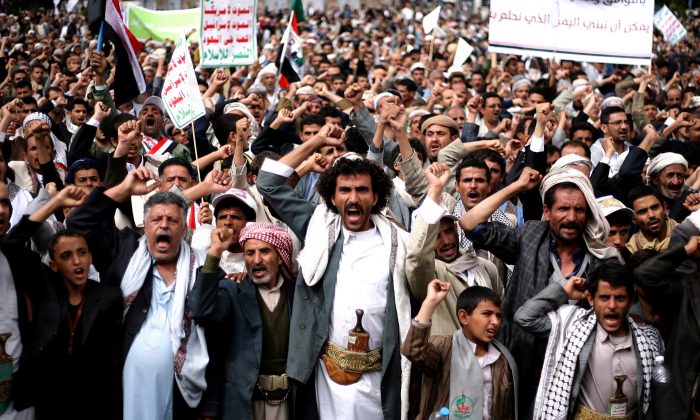 Houthi shiite rebels chant slogans during a protest near the site of a suicide bombing in Sanaa, Yemen, Thursday, Oct. 9, 2014. A suicide bomber struck at the center of the Yemeni capital of Sanaa on Thursday, setting off his explosives at a gathering of supporters of the rebel Shiite Houthis who recently overran the city, security officials said. (AP Photo/Abdullrhman Huwais)
Middle East

SANAA, Yemen—Shiite rebels who overran Yemen’s capital last month won another stunning victory Tuesday, capturing a key port on the Red Sea in a move that underlined their apparent intention to create a mini-state in the mostly chaotic and lawless Arab country.

Control over the city of Hodeida gives the rebels, known as the Houthis and widely suspected of links to Shiite Iran, an outlet that may be needed to lend viability to any future entity they create. It also adds considerably to the troubles of U.S.-backed President Abed Rabbo Mansour Hadi as he struggles to hold Yemen together.

The rebel offensive is the latest chaotic chapter for the impoverished country on the southern tip of the Arabian peninsula.

Yemen has been beset for years by an al-Qaeda-led insurgency that has staged dozens of suicide attacks against military and security personnel. It also has endured crushing poverty that has bred resentment — and outright rebellion — that took root in a secessionist movement in its once-independent southern region.

The advances by the anti-American rebels come in a country that is a centerpiece in the U.S. campaign against al-Qaeda’s leaders, hideouts and camps, often with drones. Its proximity to the vast oil fields of Washington’s Gulf Arab allies also adds to Yemen’s strategic value.

Analysts say the Houthis may be building on the momentum gained from their recent battlefield successes to seize more territory. Apart from Sanaa, they also have taken over the provinces of Saada and Omran to the north. On Tuesday, they were in full control of the province of Damar, just south of Sanaa.

The Houthis captured Hodeida and Damar without any fighting, a fact that could point to the disarray within Yemen’s army and security forces. But it could also be the result of cooperation between the rebels and forces loyal to former President Ali Abdullah Saleh, who has been trying to derail the political transition launched after he was forced to step down in 2011 after 33 years in power.

Army units loyal to Saleh are widely suspected to have aided last month’s Houthi takeover of Sanaa by stepping aside or reaching non-aggression pacts with the rebels. But this confluence of interests — Saleh’s desire to undermine the political process and to exact revenge on his foes on the one hand, and the Houthis’ territorial ambitions on the other — is likely to be short-lived, according to analyst Jane Kinninmont.

“One important variable will be the role of Yemen’s Gulf neighbors, especially Saudi Arabia,” said Kinninmonth, a Middle East expert from Chatham House, London’s prestigious political research center. “They are deeply worried by the expansion of the Houthis and may back unlikely forces who oppose it. The possibility of renewed Saudi military action can’t be ruled out either.”

Saudi Arabia, the Sunni powerhouse that borders Yemen, has expressed concern over the Houthis’ battlefield success. The territorial gains give Iran — Riyadh’s traditional foe — a foothold right on the Saudis’ doorstep.

Analysts are skeptical the Houthis have the manpower or the expertise to hold and govern vast areas, although some have speculated the rebels had intended from the start to capture a sea outlet to ensure the flow of foreign supplies. Two years ago, Yemeni authorities intercepted two vessels — allegedly from Iran — carrying weapons that officials said were destined for the Houthis. The Shiite group denied any link.

The rebels pushed into Hodeida after they had besieged it for days, according to Yemeni officials who spoke on condition of anonymity because they were not authorized to talk to the media.

The officials said the Houthis also raided a seaside residence belonging to their long-time adversary, Gen. Ali Mohsen al-Ahmar, who commanded Yemen’s elite 1st Armored Division and fought against the rebels between 2004 and 2010. They also raided the local headquarters of their sworn enemy, the Islamist Islah party.

Al-Ahmar, who is linked to Islah, has been on the run since Sanaa fell Sept. 21.

Hodeida is Yemen’s second-largest port after Aden on the Arabian Sea. Its capture places the Houthis a short distance from the strategic southern entrance of the Red Sea known as Bab al-Mandab. Much of the Gulf region’s oil exports destined for the West sail through that area.

The capture of Damar appeared to have been aided by the local al-Maqadshah tribe, known to be loyal to Saleh, who retains vast influence among tribes and the military.

The Houthis’ campaign began in the summer when they defeated militant Islamists holding several small pockets in Saada. In July, they captured Omran, which lies to the north of Sanaa, before they laid siege to the capital and overran it.

Critics of the rebels say they have modeled their movement after the Lebanese Shiite militant group Hezbollah, which wields power in southern and eastern Lebanon, as well as in the densely populated suburbs south of Beirut.

The Yemeni rebels subscribe to the Shiite Zaydi sect and take their name from the Houthi family that founded the movement in Saada and claims to be descended from the Prophet Muhammad.

Also on Tuesday, tens of thousands of people demonstrated in the southern port of Aden, calling for secession from the north of the country.

Southern Yemen was an independent nation until it was unified with the north in 1990. A movement to break away from the union was ruthlessly crushed in 1994 by Saleh.

On Tuesday, the protesters in Aden burned images of Saleh and Abdul-Malik al-Houthi, the movement’s leader.