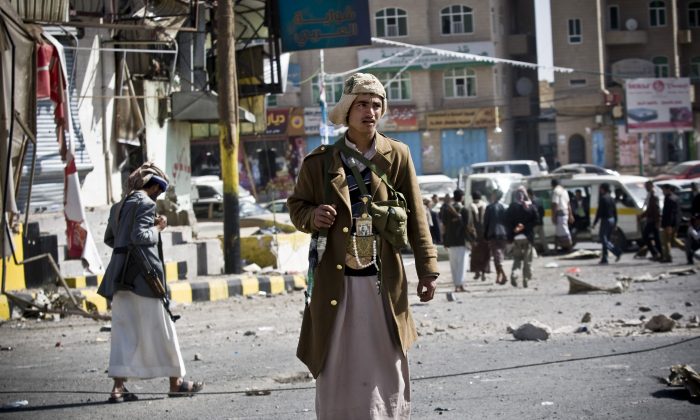 Houthi Shiite Yemeni gather while guarding a street leading to the presidential palace in Sanaa, Yemen, Tuesday, Jan. 20, 2015. Yemen's U.S.-backed leadership came under serious threat Monday as government troops clashed with Shiite rebels near the presidential palace and a key military base in what one official called "a step toward a coup." (AP Photo/Hani Mohammed)
News

The leader of the Shiite rebels who control Yemen’s capital and seized the presidential palace on Tuesday warned of a further escalation if President Abed Rabbo Mansour Hadi stands in the way of political reform.

In a lengthy speech aired by the group’s TV network, Abdel-Malek al-Houthi said “all options are open” and that escalation “has no ceiling” if the president does not “speed up” implementation of a U.N.-brokered peace deal.

That deal would grant the Shiite rebels, known as Houthis, greater power and shake up a committee tasked with drafting a new constitution.

Houthi also voiced defiance to the U.N. Security Council, which held a closed-door meeting on the Yemeni crisis on Tuesday, saying “any measure you take to force this country to succumb … will not benefit you.”

The United Nations Security Council is calling for a lasting cease-fire in Yemen and condemning the recent surge in violence aimed at undermining its legitimate government institutions.

In a press statement approved by all 15 members on Tuesday, the council “underlined” that President Abed Rabbo Mansour Hadi “is the legitimate authority.”

Violence has gripped Yemen’s capital, Sanaa, since Monday and has been described as a coup. Yemeni authorities say Shiite Houthi rebels shelled Hadi’s residence and raided the presidential palace on Tuesday.

The Security Council said all parties must stand with Hadi and his Cabinet “to keep the country on track to stability and security.”

It welcomed the completion of a draft constitution, looked forward to public consultations and called for all parties to rapidly engage in finalizing the document.