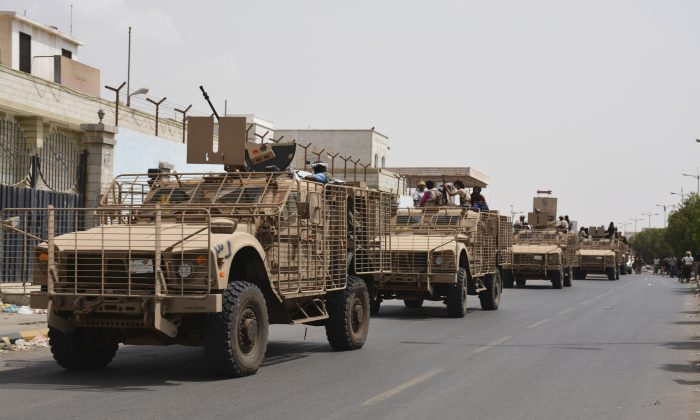 Yemeni fighters against Shiite rebels ride military vehicles on a street in the port city of Aden, Yemen, Tuesday, July 14, 2015. Yemeni forces battling the Shiite rebels in the country's south said they took control on Tuesday of the airport in the strategic port city of Aden, driving the Houthi rebels there into a part of the city jutting out into the sea. (AP Photo/Abo Muhammed)
Middle East

Yemeni Government Says It Is Consolidating Control of Aden

CAIRO—A Yemeni government spokesman says that government troops are consolidating control of the southern port city of Aden, with only a few “terrorist pockets” of Shiite rebels remaining to be cleared out.

Meanwhile, an exiled official in Saudi Arabia denied reports that exiled Yemeni ministers had landed in Aden, adding that the situation is still “too fragile” to set a return date now.

The officials spoke on condition of anonymity because they are not authorized to speak to reporters.