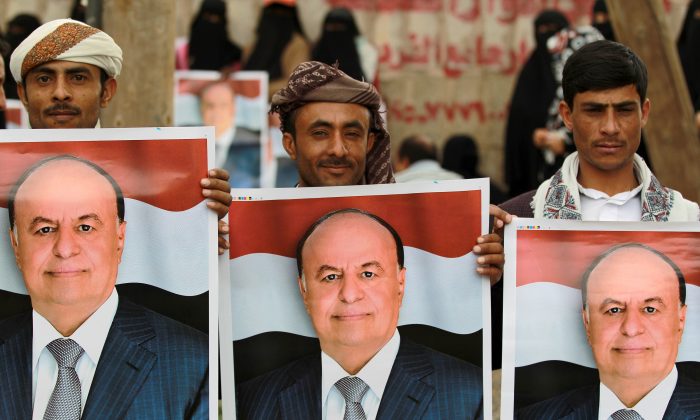 Demonstrators hold up posters bearing the portrait of Yemen's President Abd-Rabbu Mansour Hadi during a pro-government demonstration on Aug. 26, 2014, in the Yemeni capital Sanaa. Rival protests stoked up tension in Yemeni capital Sanaa on Aug. 24, as a presidential negotiating team abandoned talks with Shiite rebels, accusing them of seeking to ignite a war. (Mohamed Huwais/AFP/Getty Images)
Middle East

SANAA, Yemen—Yemen’s Shiite rebels rejected President Abed Rabbo Mansour Hadi’s choice of a new prime minister on Tuesday, threatening to derail a U.N.-brokered peace deal with the armed group that has controlled the capital for weeks.

Shortly after the announcement, the Houthi rebels said in a statement that the naming of bin Mubarak was not “consensual” and “makes a mockery of Yemen’s independence and sovereignty as well as the will of the people.”

The rebels’ snub could signal a return to violence and could torpedo a Sept. 21 peace deal brokered by the U.N., which ended fighting that claimed the lives of at least 140 people.

The Houthis took control of the capital on the same day that the agreement was reached, and after the military virtually collapsed following weeks of protests to demand a better share in power and a change in government. The deal called for the appointment of a new head of government, and for the Houthis to pull out of the city.

Senior Houthi rebels had previously told The Associated Press that they objected to a choice of bin Mubarak because he was a close associate of the president and not seen as independent.

Bin Mubarak, a 46-year-old businessman-turned-political figure, had successfully led an effort by various political parties — including longtime rivals — to devise a political map for transition after a 2011 uprising in the impoverished country on the Arabian Peninsula.

One of the youngest politicians in Yemen, bin Mubarak emerged during the uprising that forced longtime leader Ali Abdullah Saleh to step down in a U.S.-backed agreement. Saleh handed over to Hadi the next year but continued to yield significant power.

Hadi accused Saleh and his loyalists of trying to obstruct his reform efforts. In the standoff with the Houthis, Saleh supporters backed the rebels.

On Tuesday, Saleh loyalists, who are still part of the ruling party, also rejected bin Mubarak’s nomination, saying he is, like Hadi, is from the south, endangering the balance between south and north in Yemen’s political landscape.

Bin Mubarak has good relations with Western countries and has represented Yemen at meetings of the Gulf Cooperation Council, a powerful regional group that includes Saudi Arabia, the United Arab Emirates, Kuwait and Qatar.

Critics say the Houthis are doing the bidding of Shiite-ruled Iran, which is vying for regional influence with Sunni powerhouse Saudi Arabia — Yemen’s northern neighbor.

Political analyst Mansour Hayel said the new prime minister will have to focus on security before tackling Yemen’s battered economy, and that will require support from neighbors and foreign powers.

“Neither the president nor the prime minister can rescue Yemen from death unless there is regional and international consensus,” he said. Hayel said the Houthis’ rejection of bin Mubarak indicates they are out to “obstruct the political process.”

Yemen faces other challenges. In addition to the Houthi rebels, an al-Qaida branch poses a constant threat in the south. The U.S. considers Yemen’s al-Qaida branch to be the world’s most dangerous, and has helped support government offensives against the group with drone strikes. A southern movement is also demanding outright autonomy from the central government.