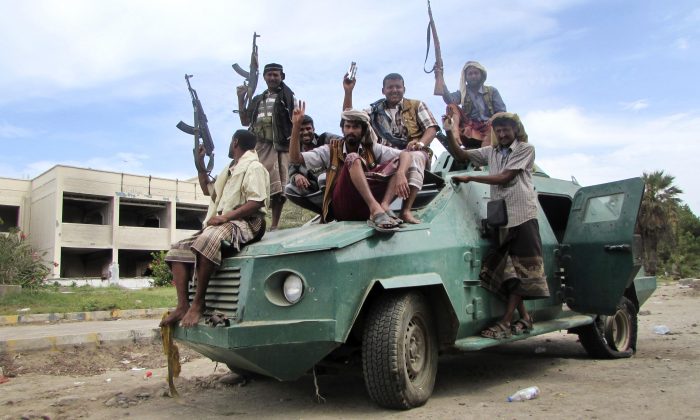 SANAA, Yemen—Mediated talks between the Yemeni government and al-Qaida to persuade the militants to give up their weapons or move out of the southern port city of Aden have failed, Yemeni security officials in government-controlled Aden and tribal mediators said Saturday.

Tribal and public figures accepted by both sides, who have been involved in mediation talks, told The Associated Press the discussions began about three months ago, after government forces pushed Houthi Shiite rebels out of Aden.

After the Houthis were expelled in July, al-Qaida took advantage of the security vacuum as pro-government forces moved outside Aden to challenge the Houthis, as clashes raged between the two sides in other parts of the country.

Yemen has been embroiled in fighting between Houthis and allied army units against forces loyal to the internationally recognized government as well as southern separatists and other militants.

Al-Qaida militants had been fighting alongside pro-government forces without revealing their affiliation, focusing on capturing and storing weapons during the clashes with the Houthis, a security official in Aden said. Security officials said al-Qaida and other extremist Islamic groups in Aden obtained more than 55 armored vehicles and 22 tanks, captured during the fighting.

Al-Qaida in Syria Withdraws From Area Near Turkish Border

Officials in Aden said al-Qaida held large armed parades in the city in the past two days.

The officials spoke on condition of anonymity because they’re not authorized to speak to journalists.